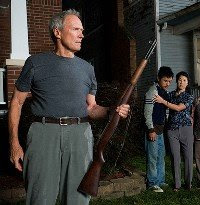 I saw the movie Gran Torino in the theatre last Sunday. The last movie I saw before that in a theatre was the recent X-Files movie. Both were good movies, but I almost walked out on both before they even got past the opening credits.

Due to a lack of time I rarely see movies when they first come out – instead settling for the convenience and economy of dvds and television. But sometimes, I just want to get lost in a dark theatre and totally focus on the movie, instead of the one hundred and one things competing for my attention at home. So a few times a year, I shell out the seven dollars for my ticket, the same amount again for a soda and popcorn, and find a "center row, half-way back" theatre seat and settle in for a couple of hours of escapism.

Maybe I'm just getting "old, old, old" (a saying I've picked up from my co-author), but during the last two movies, the theatre experience has been less than enjoyable. I've begun to have real problems with the "sound," starting with the previews of coming attractions.

The sound is too loud.

Get out of my seat, find a theatre employee, and complain loud.

Why so loud? Is it a lack of care? An equipment issue? Do the theatre employees have too many other things to do? Too many screens to monitor at the same time? Is the sound level of the previews louder than the movie track? What's changed?

I know years ago there was someone in the film booth, running the projector and making sure that the film and sound were running smoothly. I assume that with the digital age, everything is now computerized. If so, then it seems strange that sound levels couldn't be maintained at a reasonable decibel. Trust me, I'm not complaining about just an annoyingly loud problem. I'm trying to describe a level that would be a violation if it occurred as a result of quarry blasting; a level that is an actual physical assault on your hearing; stomach churning, knife-through-your-head loud.

Last Sunday there were many long minutes, at least ten or fifteen, before the sound was lowered. I'm guessing there must be a set number of complaints a theatre owner must get before he acts. On Sunday, head throbbing, trapped in my "center row, half-way back" seat, I offered up a silent prayer for the senior citizens who can always be counted on to make the trek from their seats to the ticket booth demanding relief or a refund.

This past week I heard an award-winning sound engineer discuss how movie fans miss a lot by not having a sound system for their expensive high-definition televisions. He asserted that the speakers that come installed on televisions are inadequate and can't possibly give you that in-theatre experience.

But maybe that's not always such a bad thing.

p.s. – Despite everything Gran Torino was a good movie.
Posted by The Stiletto Gang at 5:00 AM