The Marvels of Modern Dentistry 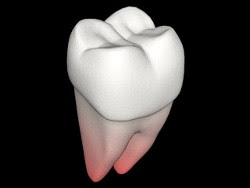 I was one of those fortunate children who didn’t get too many cavities. I ate as much candy as the next sugar-obsessed cretin growing up in 1970s America, but every time I went to the dentist, I got a clean bill of health. (Unlike one of my siblings, who had every tooth filled by the time he was ten; the dentist told my mother that he had a “strong gag reflex” which apparently, was extremely distasteful to the dentist. It went into said sibling’s dental “permanent record” and has followed him from dentist to dentist, even though he outgrew this in oh, about 1982.) I suffered through two fillings and that was it. Nothing else.

Until recently. I had a toothache—as well as a host of other disgusting problems with what I found out was tooth #3 that I’ll spare you the details of—and decided that with my medical history, it wasn’t a wise idea to fool around with that. What if I got an infection, it traveled to my brain and killed me? (Don’t laugh…these are the things that I think of when I wake up in the middle of the night.) Certain death from infection—and the fact that half the tooth fell out into the sink while I was brushing one morning—propelled me to see my regular dentist, Dr. G., who took an x-ray and came back into the room holding the x-ray with a grim expression on his face, despite the fact that he was smiling. He always smiles; that’s why I love Dr. G.

“Don’t say it,” I said, knowing that a two-word diagnosis starting with “root” and ending with “canal” was coming. If only that had been the end of it.

He stopped smiling. That’s when I knew I was in trouble. “Well, you do need a root canal. And a little gum surgery.” He handed me a tissue as I began to cry. “I can recommend a dentist for both procedures.” He wrote out a card with the name of the root canal guy. And as for the gum surgery, he said, “We have a few options. Dr. C, our first choice, will put you to sleep…”“Stop!” I said. “We have a winner!” And as you know if you read my pre-holiday blog, Dr. C. is now known around these parts as the “gum surgery whisperer.” Root canal wasn’t as bad as I expected either. Although I would prefer not to have another one, it wasn’t the torture that I thought it would be. Dr. W. and his assistant, Susan, were lovely. But I hope I never see them again, something that I told them upon leaving the office.

I went back to see Dr. G., my regular dentist, yesterday to get fitted for my crown (and not the tiara kind). I told him that I was amazed at how far dentistry had come since I had gotten my last filling in 1977. (This while he held an impression in my mouth with his finger…I asked him why an electronic arm hadn’t been developed so that he didn’t have to stand there for two minutes holding the impression and he explained it to me. Suffice it to say that the electronic arm wouldn’t be as good as his finger.) He explained that most people are pathologically afraid of the dentist, but these days, there’s really no need to be. Did you know that they even have stuff to numb your gums before they shoot you full of Novocaine? (It’s way better than the stuff they used in 1977, but in my opinion, still not great. I think that we should all be given general anesthetic before we get any kind of shots or needles inserted anywhere in our bodies, but maybe that’s just me.) Or that you can drink a little teaspoon of liquid and go to sleep for your gum surgery, waking up in the car on the Taconic State Parkway and asking your husband how you got there? Or that you can watch “The View” while the endodontist drills away at your tooth and removes your tooth’s roots? I remember the days when they gave you a bullet to bite on before they pulled your wisdom teeth. Things have certainly changed.

Go to the dentist, people. I know there are many of you out there putting it off. And yes, I used to be one of them. Had I gone when tooth #3 initially started to give me trouble, I probably would have only needed a replacement filling. But I let it go and I’m a little lighter in the pocketbook and have undergone procedures that I could have only imagined. I am here to tell you that the host of tortures that we endured as children are long in the past.

But the sound of a drill boring into your enamel still sounds--and smells--the same.