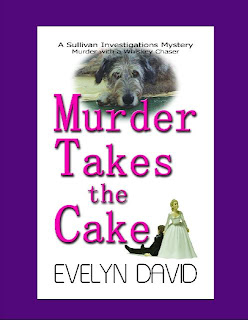 My holidays were rich with family and friends, way too much food, way too little exercise, and a final read-through of the proofs of Murder Takes the Cake. As other authors will readily understand, there is always that niggling doubt, when you hand in a manuscript, that the story won’t hold up, that you’ve missed the mark, and it’s just 90,000 words going nowhere. So I was so relieved when I finished my proofing duties to discover that I like the book. If I say so myself – and I will – it’s a really good mystery that I think will delight and confound you. A sneak preview will be on sale at Love is Murder (where the Southern half of Evelyn David will happily sign copies), and in general release in May.

But news articles during the holiday season also gave me more than enough material for a dozen other books. It started me thinking about the relativity of evil. On Christmas Eve, Bruce Pardo dressed up as Santa and went on a murderous rampage against his ex-wife and her family. It wasn’t enough that he killed the woman to whom he had been married for barely two years. He also shot in the face an eight-year old little girl who answered the door in gleeful anticipation of meeting Santa. For that child, this killer murdered man and myth at the same time.

Earlier in December, the incredible Ponzi scheme of Bernard Madoff was finally exposed, but not before he had bilked investors out of 50 billion dollars. Now I have trouble conceiving of what you can do with a million dollars, so I am hard-pressed to figure out how Mr. Madoff spent all of his ill-gotten fortune. I mean just how many houses can you buy? How many tailored suits? Lobster and foie gras dinners?

Pardo’s horrific storm of terror ended with nine dead and the killer taking his own life, only because his elaborate escape plan failed. In contrast, Madoff’s quieter, but equally destructive tornado of greed has left hundreds of survivors penniless, one investor dead from suicide after being wiped out by the Ponzi scheme, and Mr. Madoff still on Park Avenue. Had he knocked over the corner candy store, he’d be doing hard time waiting out his trial on Riker’s Island. Instead, he is confined to his plush apartment, suffering only the indignity of an ankle bracelet.

For those who would argue that Madoff’s crime is only about money, I would counter that we don’t yet know the ripple effect of his deed. One investor committed suicide, but could it be considered murder since Madoff’s fingerprints are in effect all over the gun? And let’s take this relativity discussion a step further. It’s one thing, in my mind, for a rich man to steal from another wealthy investor. I could even allow that investors must shoulder part of the blame since they should have done due diligence, not glommed onto a get-rich scheme that was too good to be true.

But Madoff crossed the line when he stole $92 million from Hadassah Medical Center in Israel, an institution nominated for a Nobel Peace Prize because of its equality in treatment of Arabs and Jews, its ethnic and religious diversity, and its efforts to build bridges to peace. Madoff sinned when he wiped out the assets of the Elie Wiesel Foundation for Humanity, an organization dedicated to combating indifference, intolerance, and injustice. To me, stealing to provide food for your family is still wrong, but perhaps understandable. Fleecing the rich of some of their ill-gotten gains is also wrong, but maybe it is only money. Stealing from institutions who support the poor and downtrodden – suddenly I can see no excuses.

Life is not black and white, and there are shades of grey even in crime. That’s why you have degrees of capital crimes: premedidated like Pardo’s rampage; reckless when you’re driving drunk; justifiable when you’re defending your family. But while the Santa-dressed killer’s crime flashed across the front pages of the newspapers and dominated the airwaves, I’m reminded that Bernard Madoff’s crimes were equally horrific. It’s similar to the difference between the ground soldier and the bombardier. One can see the impact of his actions, the other cannot. But the swath of death and destruction caused by the bomb dropped from the protective cocoon of the clouds can be broader, wider, deeper than the foot soldier with a rifle.

In our books, Mac Sullivan, Rachel Brenner, and Whiskey confront evil, but you can be sure, they also always defeat it. The good guys will always win in the Evelyn David mysteries. Would that life be so simple. But as we begin a new year, I'm going to focus on the fact that there always have been and will continue to be, good people like the ficitional characters I help to create.

With a belief in the good of mankind, all best wishes for a happy, healthy new year.