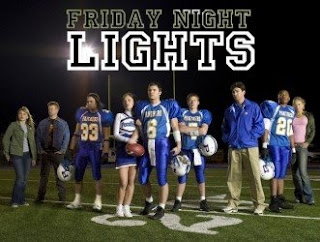 Hubby and I are thrilled that Friday Night Lights is back on the air–on Friday nights, of course.

Neither of us are really football fans, but we love that TV series. We didn’t watch it when it first came on the air, but were introduced through Netflix and watched all of the first three seasons. Best way to watch a TV series by the way.

Probably the reason we’ve become such big fans is going to Friday night football games when our grandson who lived with us was playing football. He was a the quarterback sometimes and half back others. Unfortunately, the team itself wasn’t great and seldom won a game–but we sat bundled up in the stands cheering them on for every home game. (Seniors got free passes to get in which was also great.)

We knew half the cheerleading squad (several had been grandson’s girlfriend at one time or another), and many of the other spectators stopped by to visit. We also saw a lot of the student body parading by us on their way back and forth to the refreshment stand or just to be seen.

We live in the foothills and grandson either rode the bus to school and back or was picked up by a friend. During football practice, there was a sports bus that would bring kids home afterwards. Sometimes grandson would miss that bus and we’d have to drive to town to pick him up. Usually he’d go sit in the fast food place across from the high school to wait since it took us about 20 minutes to make the trip.

When I watch Friday Night Lights it reminds me of those years we had that grandson living with us. We knew so many boys who remind us of the kids we see in that show. I guess it reminds us of a fun time in our life.

Later on, our granddaughter who lives next door, played soccer all four years of high school. We hauled our chairs to the soccer field and watched those games too. So far there isn’t a TV show about a soccer coach or team.

Of course I have favorite mystery shows I enjoy though I must admit Medium and Ghost Whisperer are up there among my favorites. By the time I’ve spent most of the day in front of the computer, I admit it, by evening I’m ready for some mindless and entertaining TV viewing.

Marilyn
http://fictionforyou.com
Posted by The Stiletto Gang at 4:00 AM