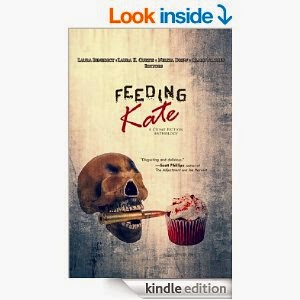 When a group of writers decided on Twitter to put together an anthology—Feeding Kate: A Crime Fiction Anthology (http://www.amazon.com/Feeding-Kate-Crime-Fiction-Anthology-ebook/dp/B00B6UMGSM)—to benefit our friend Sabrina and the Lupus Foundation, I was in on it from the start. After all, I love Sabrina, and I deal with lupus every day myself.

Do you like to read of characters who make difficult choices? Are there people you’ve known or just heard about who have inspired you with their courage or their love?

Rodriguez is 2015 chair of the AWP Indigenous/Aboriginal American Writer’s Caucus, immediate past president of the Borders Crimes chapter of Sisters in Crime, a founding board member of Latino Writers Collective and The Writers Place, and a member of Wordcraft Circle of Native American Writers and Storytellers, Kansas City Cherokee Community, and International Thriller Writers. Find her on Twitter as @rodriguez_linda, on Facebook at https://www.facebook.com/LindaRodriguezWrites, and on blogs with The Stiletto Gang http: http://thestilettogang.blogspot.com/, Writers Who Kill http://writerswhokill.blogspot.com/, and her own blog http://lindarodriguezwrites.blogspot.com.

Reine, I think the discovery that our parents have, in some way, deceived us when we were young and that the world is not the way they presented it to us--something almost every child learns when grown to at least some extent--can be a devastating discovery, especially if the deception was not the usual sugarcoating of reality but a huge disconnect with the truth. So in one way or another, I think many of us can identify to a certain extent with CJ's situation, extreme as it is.

Mary, it's more powerful and darker than my Skeet books. I suspect I will write more with these characters, however.

Posted by Linda Rodriguez at 11:29 AM