The Sixties as Background for Murder

By Kay Kendall
T. Jefferson Parker, the bestselling author of 20 crime novels, once confided to me that his two mysteries that touched on the Vietnam War had “my readers staying away in droves.” He explained, “Needless to say, I never mentioned the war again.” Our paths intersected two years ago at a thriller writers’ conference, shortly after the publication of my debut mystery,Desolation Row. He believed that his readers avoided the subject of a war that Americans know we didn’t win. Were the sacrifices worth it? Let’s just not think about it.
I knew the subject matter wasn’t popular, but it was a book I had to write. I had to get that one out of my system so I could work on the next subject I felt “called” to discuss, the women’s liberation movement of the late sixties and early seventies. So, the bottom line for me is that even if T. Jefferson Parker had warned me ahead of time to stay clear of the war that many have compared to a quagmire, I would not have paid his advice any heed. The story of Desolation Row had to come to light. I had to write that book so that the others that were waiting in line behind it, more or less patiently, could have their turn too.
The British statesman and philosopher Edmond Burke wrote, “Those who do not know history are destined to repeat it.” As well, how can you hope to understand how we got where we are now when you don’t understand where we came from? Events that happened in the sixties and early seventies still echo down the decades today. Just as some describe America’s battles in the Middle East as “the Vietnam War in the sand,” the upheavals of women’s liberation have not ended. If anything, the subject of women’s place in society is even timelier than ever. 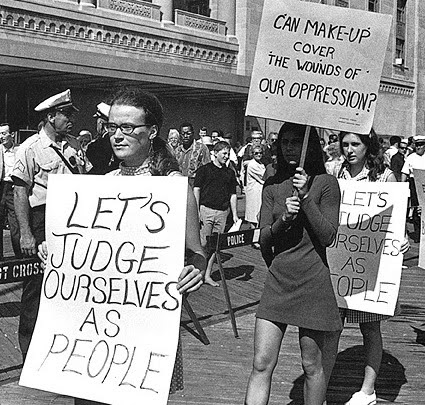 Rainy Day Women launches on July 7, and I can hardly wait. In book two of her saga, this time intrepid amateur sleuth Austin Starr searches for a killer of female activists in 1969, a year after the first mystery took place. A murderer stalks the members of women’s consciousness raising groups at the University of Washington and the University of British Columbia. During the week of the Manson murders and Woodstock, new mother Austin bundles up her infant son Wyatt—just three months old—and flies with him across the continent to help her dear friend Larissa during her personal crisis. The Mounties have fingered her as their chief suspect in at least one of the murders. More trouble ensues.
I have waited decades to write this book. The women’s movement played an enormous role in my life, and it’s not an exaggeration to say that it underlines everything I do to this very day. Getting the fervor and excitement of the time period right is important. Showing the raw sexism that was exhibited by many men without any hesitation is also vital. Clearly I believe in serving up a little history with my murder and mayhem. Just think--no VCRs, let alone DVRs, no cell phones or personal computers, no Kardashians! A long ago time indeed.
I wonder if any of the other writers in the Stiletto Gang (those of the right age, that is) participated in women’s liberation groups. Did any of you readers? If so, I hope you will leave comments here about your experiences.  I’d love to know how they compare with mine.
*******
Kay Kendall set her debut novel, DESOLATION ROW--AN AUSTIN STARR MYSTERY in 1968. The sequel RAINY DAY WOMEN (June 2015) shows her amateur sleuth Austin Starr proving her best friend didn't murder women’s liberation activists in Seattle and Vancouver. A fan of historical mysteries, Kay does for the 1960s what novelist Jacqueline Winspear accomplishes for England in the 1930s–present atmospheric mysteries that capture the spirit of the age. Kay is also an award-winning international PR executive who lives in Texas with her husband, three house rabbits, and spaniel Wills. Terribly allergic to the bunnies, she loves them anyway! Her book titles show she’s a Bob Dylan buff too.