Sasscer Hill’s horse racing mysteries have been compared with those of Dick Francis. Her debut novel, Full Mortality, was nominated for an Agatha and a Macavity. She has written additional novels featuring Nikki Latrelle and also published a number of short stories. Recently, she signed a multiple book deal with St. Martin’s Press Minotaur Books for a new series.

Welcome, Sasscer, to The Stiletto Gang. Tell us about your background and how you began writing mysteries.

Hi, Paula, I’m honored to have been invited to speak with The Stiletto Gang readers today. Mysteries have always been my favorite fiction genre. As a youngster, I loved the Nancy Drew books and read all the Sherlock Holmes stories. I also loved horses, action, and adventure. Naturally, I discovered Walter Farley’s Black Stallion books and became addicted to them as soon as I could read.

Since mysteries were my favorite genre growing up, from Dick Francis to Josephine Tey, if I was going to write, mystery writing was my natural choice. But like so many of us, I got an office job after graduating from college (Franklin and Marshall), and the mystery writing never had a chance until later in life. I spent twenty years working in marketing and promotions for several Washington, DC associations, and two different academic book publishers. I managed to start a romantic suspense novel while I was still working, but when the novel was completed—and soundly rejected—I soon realized I had a lot to learn if I wanted to be a published author. I took classes at the Bethesda Writer’s Center in Maryland, near DC. After some eye-opening courses, I wrote FULL MORTALITY, later published by Wildside Press. 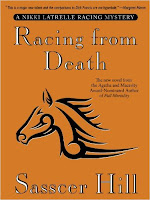 In the last few years, you’ve made significant changes in your life by selling your family home in Maryland and moving to South Carolina. How has that affected your writing?
I lost most of 2012 and the beginning of 2013 to selling the farm that had been in my family for over two hundred years, my horses, and moving to Aiken and setting up a new home and life. Once I got settled in 2013, I wrote the novel with the working title FLAMINGO ROAD and more than 50,000 words of my WIP, THE DARK SIDE OF TOWN. My life is easier and far more convenient since the move, giving me more time to write. I love living in Aiken where I am surrounded by horses, clean air, and very little traffic or crime.

What made you decide to write a new series?
I had no choice. By the time I finished the third book in the Nikki Latrelle series for the small Wildside Press, I’d learned New York publishers were not interested in a new book in a series that was already in the hands of another publisher–unless, of course, the series had been blessed with tremendous sales. A word to the wise: you are unlikely to get tremendous sales when publishing with a small press.

I was lucky enough to secure a savvy, reputable agent who told me if I wanted a bigger publisher, hopefully one of the “Big Five,” I had to start a new series. So I did, creating “Fia McKee.”

Describe your new protagonist, Fia McKee. How is she like and different from Nikki Latrelle?

Fia McKee is a thirty-two-year old agent for the real life agency, Thoroughbred Racing Protective Bureau (TRPB.) She has more life experience than twenty-three-year-old Nikki Latrelle, who was always hoping to avoid involvement in altercations or stressful events. Fia, on the other hand, strides in with her eyes open. She was a patrol cop and undercover agent for the Baltimore City PD, and has already seen much of life’s horrors.

Nikki Latrelle had a horrific childhood, and wants only to leave all that behind her. Fia’s childhood was great until her mother walked out on her when she was fifteen and her father was murdered. She became a cop because of the anger that burned inside her at the injustice of her father’s unsolved murder case.
Your second Fia McKee mystery just won First Place in the Carrie McCray 2015 Competition for First Chapter of a Novel. Tell us about your journey in getting the two book deal with St. Martin’s Press, Minotaur Books and when the books will be available.
As I write this, the St. Martins contract is being finalized, and I do not yet have a publication date. Believe me, Paula, you’ll be the first to know!

I finished the manuscript with the working title FLAMINGO ROAD around August of 2014. I started the second in the series in October of 2014. My agent began shopping FLAMINGO ROAD in December of 2014. When an editor at St. Martins Minotaur showed interest in FLAMINGO ROAD, but with some reservations about the public’s interest in a horse racing novel, I immediately went to work.
Phone calls and research provided me with statistics on the strong popularity of horse racing. I cited things like NBC’s unprecedented ten-year extension agreement to broadcast rights to the Breeders Cup weekend races. I wrote about the recent ESPN poll showing horse racing is the most popular non-team sport, beating out tennis, boxing, and even NASCAR. How England’s three-day Cheltenham Racing Festival had the biggest attendance in history this past March. My agent sent all of it to the St. Martins editor.

Then the stars aligned like magic. I received the Carrie McCray award for the second book in my new series. The Nikki Latrelle series drew an extraordinarily favorable review from racing’s leading turf writer and racing analyst, Steve Haskin. At the end of this lovely endorsement he wrote, “Dick Francis lives!” And most amazingly, a horse named American Pharoah broke a thirty-seven-year Triple Crown drought wide open with 22 million television viewers, tremendous press, and a cover photo on Sports Illustrated. I received an offer the next day.

Wow, what a wonderful whirlwind! Now that you’re busy with the new series, will you have time to write more short stories?
I honestly don’t know.

What advice would you give to writers and aspiring writers?
Never give up.
Learn your craft, but follow your heart.
Always be kind and gracious--think Hank Phillippi Ryan. Remember, you never know if the person you are talking to might hold the key to unlock a door you haven’t been able to pass through.
Know your market. Have a list of who might buy your book.
Join groups, but don’t let them take too much of your time.
Nothing is as important as writing.
Network, but do so within reason. See previous sentence.
When you go to meetings note (A) writers you like and admire. Also, note (B) writers you don’t like or admire. Tip: Be sure not to behave like the B writers!

Sasscer, thank you for being with us and many congratulations on your much deserved success. We’re looking forward to reading your new series!