Ask an Author - Where do you get your ideas? Lynn Cahoon


Okay, so now you think I’m insane, but honestly, there are three ways a story starts to gel for me. It can be setting, like the fictional town of South Cove where my tourist trap mysteries are set. I visited a small tourist town on the coast and fell in love with a house for sale. The house kept me thinking about the area, and Guidebook to Murder started to form after that.


Another way I get ideas is from a situation. What would happen if? In the tourist trap series, my situational question is what would happen to a Type A personality who after spending a week on vacation, decides to chuck it all and open a coffee shop.


But the final place I get ideas from is the voices. Once I’ve got an idea in mind, the voices start to populate my new imaginary world. Jill needs a BFF, and Amy Newman walks on the page, all surfer girl with a nerdy brain. Jill’s got a lot on her plate, so she asks her Aunt Jackie to come and help with the coffee shop/bookstore for a week or two. First day running the joint, and her aunt hires Toby Killion, the hot, hunky part time police detective. And it goes on and on.


I love meeting the new characters, finding out who they are, and where they fit into the story. The thing I don’t like is naming them. I like characters with ‘s’ names. Sarah, Sally, Seth, Shauna. I also apparently really like the name Derek as a secondary character since I had a guy by that name in two different series. I went through a ‘j’ stage – Jill, James, Jesse, Jake. But I think I’ve broken my same name habit. Or at least I hope.


Don’t get me wrong, I kind of plot. I do bullet points of each of the chapters and then work my way through the story as I write. However, most times, I don’t have the points in the right chapter. The characters have taken over the story.


I had one story where I had a love scene in the wrong place. My characters when right up to the edge, then balked. Kind of like a horse with a jump and the rider, me, gets thrown off. When I dusted off my jeans, I asked what the heck just happened, and my heroine said, “I’m not ready yet.”


So my hot love scene got moved and the hero stole a good night kiss instead.


Some writers don’t agree with the voices argument. They swear they are in total control of their creative process. I think the girls in the attic are keeping them from seeing the true magic.


Now it’s time for you to chime in. Do you believe in the voices? Or as a reader do you really not care where the stories come from, as long as they keep coming? 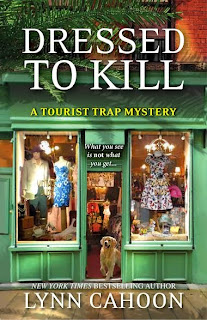 
Jill Gardner—owner of Coffee, Books, and More in the tucked-away town of South Cove, California—is not particularly thrilled to be portraying a twenties flapper for the dinner theater murder mystery. Though it is for charity…


Of course everyone is expecting a “dead” body at the dress rehearsal…but this one isn’t acting! It turns out the main suspect is the late actor’s conniving girlfriend Sherry…who also happens to be the ex-wife of Jill’s main squeeze. Sherry is definitely a master manipulator…but is she a killer? Jill may discover the truth only when the curtain comes up on the final act…and by then, it may be far too late.

"Murder, dirty politics, pirate lore, and a hot police detective: Guidebook to Murder has it all! A cozy lover’s dream come true." --Susan McBride, author of The Debutante Dropout Mysteries
Posted by The Stiletto Gang at 6:49 AM