Around the U.S. plans are being made for the upcoming Independence Day weekend. In Laguna Beach where the Pampered Pets Mysteries are set, residents and visitors will be celebrating the 4th of July holiday with free admission to the Art-a-Fair Fine Arts Festival and a patriotic band concert at 10:30 AM by the Laguna Concert Band. Then in the evening there will be fireworks originating from Monument Point at Heisler Park. With the Pacific Ocean as the backdrop, we bet they’ll be awesome!

Here in the Midwest, there will be parades with floats, high school marching bands, kids on bikes festooned with red, white and blue streamers. Later on there will be picnics, swimming, and community fireworks.  Some of the festivities begin today with the symphony’s Yankee Doodle Pops at the State Capitol. This year’s theme is America’s Musical Heartland which includes a commissioned movement, Symphony On A Stick, which depicts in music the sights and sounds of the Iowa State Fair. (At the Iowa State Fair, which isn’t until August, you can find almost any type of food on a stick.) 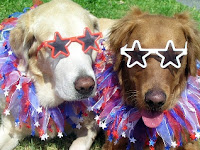 We love the tradition of family get-togethers on the 4th.  Our celebrations will most likely include friends and family and fireworks. Parades, food on the grill and sparklers for the kids. What about you? What are your plans for the weekend? A cook-out or picnic? A lawn chair and a book? Check out our Pinterest board Celebrations for some other ideas for special Independence Day snacks. Leave a comment below to be entered in the #giveaway for a free Sparkle Abbey book and summer celebration reading tote!

In our latest book, Downton Tabby, pet therapist, Caro Lamont, agrees to keep an office mate’s cat while he runs home. Little does she know that charming Brit, Graham Cash, will not be coming back for his feline anytime soon. Soon there’s a dead body, a missing person, a snoopy reporter, and a mysterious SUV. In short order Caro and the rest of her crew are involved in a dangerous game of cat and mouse.

Sparkle Abbey is the pseudonym of mystery authors Mary Lee Woods and Anita Carter. They’ve chosen to use Sparkle Abbey as their pen name because they liked the idea of combining the names of their two rescue pets – Sparkle (ML’s cat) and Abbey (Anita’s dog). The authors co-write the bestselling Pampered Pets Mystery Series which focuses on the wacky world of precious pedigrees, pampered pooches, and secrets in posh Laguna Beach, California.

They love to hear from readers so stop by their website: www.sparkleabbey.com
Or visit them on Facebook at: www.facebook.com/SparkleAbbey

Next up? Book 8: Raiders of the Lost Bark