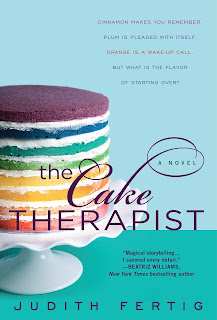 Thank you to the amazing Linda Rodriguez for inviting me to guest blog on The Stiletto Gang today.

You see, I thought I might become a mystery writer, too.

But no one died in the first chapter or two of the book I wrote.  My debut novel The Cake Therapist (Berkley, June 2015) turns out to be women’s fiction with flavor and flashbacks.

It also turns out that I have a two-track mind—I love reading and writing novels that alternate from the present to the past. I love the challenge of figuring out how those two parts fit together by the end of the book.

Flashbacks became the mystery part of The Cake Therapist, a story about a gifted pastry chef.  When her New York life melted down like buttercream frosting on a hot day, Neely decided to start over in her Midwestern hometown, a blue collar burg that had recently reinvented itself as a bridal district.

Neely’s special gift helps her create wedding cakes that fit her brides like couture gowns. When Neely focuses on a person and yet lets her mind wander, she tastes a flavor that becomes sort of a hyperlink to a feeling. The feeling is the heart of that person’s story, an event from the past that still holds on. And we all have that story or stories.

Neely uses her special talent to figure out what flavors her clients need to move on, start over, rethink, or simply celebrate.

But the one flavor and situation she can’t figure out holds the key to an unsolved disappearance dating back to World War II.

As the sour flavor of anger intensifies, the flashback scenes do, too.  The flavor and flashbacks start to puzzle, then annoy, and almost torment Neely. Until she figures it all out.

I loved immersing myself in the flashback time periods. I think the glimpses of stories from the past are the secret filling of this “cake” novel.  I wanted contrast and depth and echoes of the past to inform the present.

I’m still enthralled with the secret language of flavor and still working with my two-track mind on the second novel in the series, The Memory of Lemon. 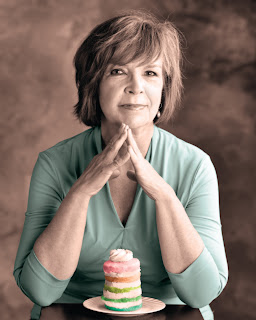 It’s getting easier to be in two places at the same time. A sip of my morning café au lait at home and all of a sudden, I’m in New Orleans in springtime, looking for that perfumer who will craft a scent that is pure “you.” And I’m off on that second track again.

Judith Fertig is an award-winning and bestselling cookbook author, specializing in baking, barbecue, and the regional cuisine of the Heartland—where flavor and storytelling combine. After college at Wittenberg University and Ohio State, she studied at École de Cuisine La Varenne (formerly in Paris) and The Cordon Bleu in London plus The Iowa Writers Workshop. Her food and lifestyle writing has appeared in The New York Times, The London Sunday Times, Country Homes & Interiors, Bon Appetit, Food & Wine, Natural Awakenings, Better Homes & Gardens, Saveur, Country Living, and Cooking Light. Fertig has appeared on the Food Network and many TV and radio programs.