It’s been a rough month. The cat died, and those pesky kids, as you refer to them, do require an occasional glance on my part. I know how much you loathe reality writing, (aka cash in exchange for the F-word… freelance writing) but I don’t see much choice in the matter. I understand that you’re currently annoyed with me. But do you think you could ease up and cut me some slack?
It all goes back to that nasty confrontation. You know, when I asked you to get on board flipping THE IT FACTOR, our 114,000 word creation, from an alternating first/third-person narrative to strictly third-person. I appreciated your hesitation: you are in charge. I get it. Since when do I take massive third-party advice and go against the Muse? But, seriously, she is our agent. You’re right, I’ve no idea if she possesses an Inner Muse, but I can tell you that she does have missile-like radar when it comes to what works and what doesn’t. Frankly, I think we’d be idiots not to listen.

I know; I heard your warning, not to mention the persnickety mirth when I explained what we needed to do. Quote: “Are you insane? Do you have any idea how much effort it took to coerce and cajole your sad little prose into a viable story? Most of that book is written in first-person. You might as well start translating War and Peace into Pig Latin, because that’s pretty much what you’re asking.”

If I can say, I think you were overstating just a tad. Granted, it’s not been a breeze. The shift from first to third is a domino effect, changing sentence structure and voice. Simple words that fit in first-person are left lost and out of place when read in third. Of course, matters were further complicated when you suggested kicking the plot up a notch. Don’t deny it; I was there. “Gosh, while we have the thing wide open here, wouldn’t it be great if Isabel’s feelings were less obvious from the beginning? And if Aidan and Anne had a past, well, that would heighten the conflict.” These, dear Muse, were not my ideas but yours. I’m not saying they weren’t good. I’m only asking if we can see our way clear to wrapping things up soon. Like, say, before technology figures out how to imprint books directly onto readers’ brains, thus subjugating the need for printed words. I know nothing as pedestrian as profit interests you, but certainly my take on that format would be about –12 cents a copy. BTW, Muse, did you know there’s no cent sign on this keyboard?

I digress. The bottom line is we’ve been going at it full throttle for weeks. I hear it. I feel it, that same rhythm we had while writing BEAUTIFUL DISASTER. You remember, you tapped me on the shoulder and said, “Hey, I know a guy. He’s got a hell of a story if you’re interested…” We’re doing that again. We’re almost there. So if you could loosen the reins a bit, I’d appreciate it. I fear if this keeps up, one of us won’t make it out alive, and I’d really hate for it to be me.

PS--Love you, Ted! Best cat that ever lived to toss a hairball! 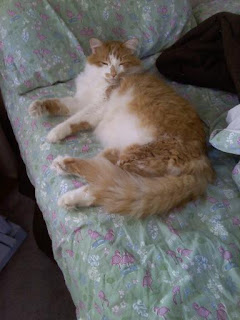 Fingers crossed if you can, BEAUTIFUL DISASTER is a finalist for NJRWA Golden Leaf Contest, winners announced next week! You can always find me on FB  http://www.facebook.com/BeautifulDisasterANovel or at http://www.laurapsinella.net/  Have you read BEAUTIFUL DISASTER yet?
Posted by The Stiletto Gang at 12:00 AM