Always a Finalist, Never a Winner 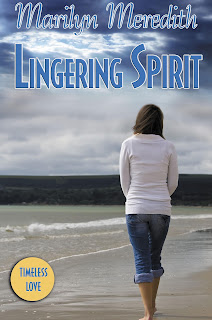 I was going to call this post Always a Bridesmaid Never a Bride--but since I'm on my 60th year of marriage, that really doesn't work.

As most of you know who read this blog on a regular basis, I'm primarily a mystery writer. However, I've written in other genres too: historical family sagas, psychological horror, Christian horror, and then there's Lingering Spirit which I've always described as a romance with a touch of the supernatural.

I wrote it long ago and it was based on something that happened to one of my daughters but greatly fictionalized. It was published once before as an e-book way back before not many even knew what that meant--and it really didn't go anywhere, or if it did I never saw any royalties. I took back the rights and later offered it to Oak Tree Press who is publishing my Rocky Bluff P.D. crime series. The publisher loved the book and put it out in trade paper. She put it on Kindle last year which made it eligible for the Epic contest and she entered it. (Epic is an organization for e-published authors and publishers, and I've been a member since their second year in existence.)

I recently heard that Lingering Spirit is a finalist in the supernatural/metaphysical category (or something like that.) Of course I'm thrilled, but my track record for the Epic contest isn't so great. I can't tell you how many of my books have been finalist (oh, I probably could if I took the time to count back), but I think it's probably five or six. And though I've gone to every awards ceremony where my books were finalist, I always returned home empty-handed.

I'm not going to attend the 2012 Epicon where the awards will be handed out--do you think that might change my luck? I doubt it. And that's not the reason I'm not going. The truth of the matter is, I'm just getting too old to fly all the way across country and change planes two or three times. I'm just happy that a book I wrote so long ago has managed to become a finalist.

For anyone who is interested, Lingering Spirit is available on Kindle and also as in trade paperback from Amazon. If you'd like an autographed copy, you can order it from my website. http://fictionforyou.com/