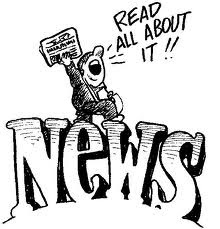 There’s so much going on behind the scenes with all the members of the Stiletto Gang that we thought we’d take a minute to share all the latest news with you!  And we’d like to take the opportunity to welcome the well-heeled and multi-published Laura Bradford to the fold!  So take a minute to say “hi” to Laura and read what’s up as you sip your coffee this fine Thursday morning (or as you sip your wine if it’s dinnertime!).
Maggie Barbieri’s sixth Murder 101 Mystery, Physical Education, will hit bookstores at the end of November.  She’s currently hard at work on the seventh installment in the series, a book that’s tentatively entitled Extra Credit.  But most exciting of all is that Maggie will be writing a new series for St. Martin’s, debuting in 2013 with The Comfort Zone.  Think "Dexter" meets "Desperate Housewives" and you'll get an idea of the story behind Maeve Conlon, suburban soccer mom, professional baker, and vigilante.  Are you feeling lucky, soccer punk?  http://maggiebarbieri.com/
Laura Bradford is just three weeks away from the launch of Dangerous Alterations, the fifth book in her Southern Sewing Circle Mystery Series written as Elizabeth Lynn Casey. She’s busy writing the seventh book in the series as well as looking at copy edits for the first book in her upcoming Amish Mystery Series written as Laura Bradford. Busy, busy, busy!  http://www.laurabradford.com/
Joelle Charbonneau’s latest Rebecca Robbins Mystery, Skating Over the Line, was released by St. Martin’s on September 27, and she has a new series coming out in July of 2012 from Berkley, starting with Murder for Choir.  Sing hallelujah, c’mon, get happy…er, mysterious!  http://www.joellecharbonneau.net
Both halves of Evelyn David are furiously writing Trick or Treat in Lottawatah, hoping to have it published within the next two weeks. Oooky, spooky, mysterious, and fun! It's the newest Brianna Sullivan e-book. They're also almost ready to have their agent start the rounds with a completely new Evelyn David mystery so they'd appreciate fingers and toes crossed so that this new book quickly finds a home!  Crossing stilettos!  http://www.evelyndavid.com
Maria Geraci says she’s almost ready to turn in a very late manuscript to her editor at Berkley. Yay! The book that was once titled The Ugly Girlfriend has a new name. It's now A Girl Like You and will be out August 2012. She’s also excited and pleased to announce that her short story, "Noche Buena," will be featured in an anthology titled Sleigh Ride which will come out this November 11. There are seven short stories and they all feature a sleigh ride. A portion of the proceeds will go to benefit victims of domestic violence.  http://mariageraci.com
Lori Gondelman (http://www.lorisreadingcorner.com/) and her Blogging BFF Jen (http://crazy-for-books.com/) are co-hosting a Trick & Treat Spooktacular from Oct 14-31. Each day an author will have a Trick post and a Treat post, one on each blog. Both blogs will be doing a book giveaway and, at the end, they’ll have a HUGE treat giveaway. Maggie Barbieri will be the author closing out the Spooktacular event!  Sounds ghoulishly fun!
Bethany Maines is eight chapters away from finishing her Orcas Island mystery if she sticks to the plan (Stick to the plan, Bethany! Stick to the plan!), after which she’ll start on a few Carrie Mae Mysteries short stories for e-release. In the meantime, she’s ramping up for the holidays. Says Bethany, “I know that sounds scary, but I'm actually really looking forward to this year.  Bring on the baking!”  http://bulletproofmascara.com/
Susan McBride appeared on “Great Day St. Louis” on October 12, doing another Great Reads segment. On October 22, she’ll take part in the second SLIBA Bookstore Cruise, signing Little Black Dress at Sue’s News in the St. Louis Galleria.  On October 30, she’ll be one of eight authors participating in the second annual Wine, Wit & Lit fundraiser for Casting for Recovery, a nonprofit organization that supports breast cancer survivors.  And she’s trying hard to write Little White Lies, her next women’s fiction book, due December 1 (gulp!).  http://susanmcbride.com
Marilyn Meredith is busy promoting Bears With Us, polishing the next book in the Deputy Tempe Crabtree mystery series, and writing a new Rocky Bluff P.D. crime novel.  Needless to say, her days are rather hectic. And to top it off, she and her hubby are going on a week long cruise to celebrate their 60th wedding anniversary.  Happy anniversary, Marilyn!  http://fictionforyou.com/
Laura Spinella’s debut, Beautiful Disaster, is a finalist in the New Jersey Romance Writers of America’s Golden Leaf Contest.  Winners will be named at their annual conference on October 31.  (Good luck, Laura!!!)  For a peek at the first chapter of BD, visit http://www.facebook.com/BeautifulDisasterANovel?sk=app_150903068337795!  Laura’s finishing up a round of revisions on her second novel, The It Factor, which she hopes to complete by mid-November.  http://lauraspinella.net
Posted by The Stiletto Gang at 5:00 AM