Thirty-three years ago, when I was asked to stand in front of the class and introduce myself to a room of fellow fourth graders who looked at me as if I was an alien from outer space (or, New Jersey, as was the case at the time), I was beside myself with fear. Would I say something dumb? Would I trip over a word? Would the cool girl in the back laugh at my sock selection? Would the cute boy in the front row see me as anything other than a shy dork?

And so it went from that day forward whenever I was faced with "the new kid" syndrome. Sure, the fears changed as I grew, molding to fit my life at that time, but still they were there, making me second guess myself and whether I would ever fit.

I guess it's probably that way with all beginnings whether they're of the first-day variety or something more. You wonder if it will go okay or if somehow you'll do something stupid to trip yourself up. But here's the thing about getting older... You start to gain wisdom, or, as I often think of it, an experienced set of eyes with which to view things in a different way--like this whole "new kid" thing. Beginnings bring new opportunities, new experiences, and that's not always a bad thing.

So today, I'll take my spot in front of the class and tell you who I am. And as you'll see, I know a lot about beginnings. 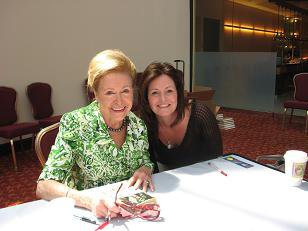 I was ten years old when I fell in love with the idea of being a writer. At the time, I imagined myself a children's writer. But my course changed after I read my first Mary Higgins Clark book when I was 14. Here I am (on the left) posing for a picture with my mystery-writing inspiration, MHC. I was a total and complete fan girl at that moment. 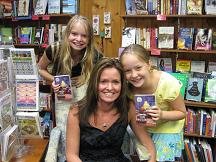 After breaking into the world of novels via a small press publisher, I landed my first big publisher deal with my Southern Sewing Circle Mystery Series (pen name: Elizabeth Lynn Casey). Seeing something I'd written...with a Berkley/Penguin logo on it? Wow. Just wow.   Here I am at the launch party for the first book in the series, SEW DEADLY. Those two beautiful girls--who were my best beginnings ever--are mine and they light my world every single day. 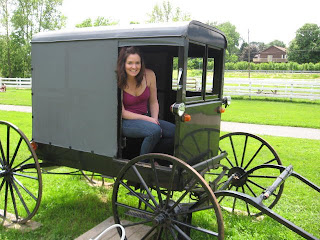 A few months ago, I signed a deal with Berkley/Penguin for a second series under my own name, Laura Bradford. The Amish Mysteries will debut its first title, HEARSE AND BUGGY next June.  That's me, conducting a little research. 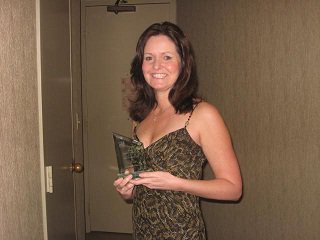 If you watch the changing photos at the top of the blog, you'll notice that I have a romance novel under my belt. Well, I have three, actually, and a fourth on the way in late 2012 or early 2013. I never intended to write romance but found myself with a story idea that refused to be a mystery. So, at the urging of my muse, I tried a romance...and then another...etc. That first romance, KAYLA'S DADDY debuted in 2010 and was followed by two more that year, with MIRACLE BABY winning me my very first writing award ever--RT Magazine Reviewer's Choice Award for Best Harlequin American of 2010. It was a total pinch-me moment I'll never forget!  This is me, back at the hotel room (in L.A.--another first) with my award.
Behind the Scenes:
Since there's more to me than just writing, I'll mention a few other "beginnings." 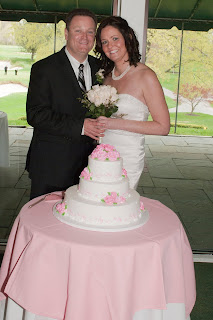 Like the Brady Bunch in the 70's, My Special Guy and I found each other when we were on our own--he with three kids, and me with my two girls. We got married in April and just got back from a belated honeymoon this week.  Here's a shot from our special day.
Since the cat, Angus, is a boy, we really are a modern day Brady Bunch...although I don't look as good as Carol Brady.  :) 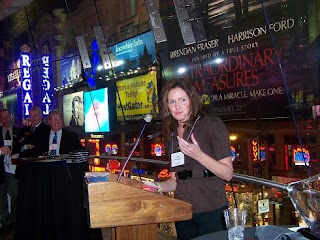 And finally, as is the case with a few of the ladies on this blog, I, too, dealt with a health crisis a few years ago, one I will continue to deal with for the rest of my life. In 2006 I was diagnosed with Multiple Sclerosis. I'm doing great and helping the cause whenever I can.  Here's me at a President's Circle event for MSAA in 2010. In this shot, I'm giving a talk at Madame Toussard's in NYC and that's Times Square over my shoulder.
So that's me (or at least a tiny snapshot of me). The new kid.


Here's to beginnings!
~Laura
P.S.  Oh...and I have a new book coming out on Tuesday. It's the fifth in my Southern Sewing Circle series--DANGEROUS ALTERATIONS.
Posted by The Stiletto Gang at 3:01 AM