How to write a short story

Sometime early this year, fellow writer and Girlfriends Book Club blogger, Malena Lott, put a call out to authors who were interested in participating in a short story anthology. Part of the proceeds would go to a program to benefit victims of domestic violence. Besides being a women's fiction writer, I'm also a labor and delivery nurse and have unfortunately seen the effects firsthand of domestic violence on women at the most vulnerable time of their lives, so I was instantly drawn to the project. The stories would be about 6-8,000 words in length and had to include a "sleigh ride."

Now, being from Florida, I can tell you that I've only seen snow a handful of times in my life (not in Florida!) and have never been on a sleigh ride. But hey, I'm a writer and writers make things up, right? So I contacted Malena and told her I would love to be one of the participating authors and Malena graciously put me on board. I had several months to write the story and I already had what I thought was a pretty good idea, so I wasn't worried.

Then I started to write the story. And about 5000 words into it I realized I'd barely introduced my characters and given them any sort of conflict. So scratch that.

Now I started to worry.

What had I gotten myself into?

I write full length contemporary romance and women's fiction. Sure, I'd done plenty of "writing exercises" before. I'd written an entire 1000 words based on the image of an empty chair or a women going into a church ( stuff like that) but I'd never written a complete, satisfying story with a beginning, a middle, and an end in so few words. I was stumped.

And then I discovered the show, Love Bites, an hour long romantic comedy (from the creator of Sex and the City). Each hour long episode featured 3 short 20 minute stories that all connected together. Think Love, American Style (if you can remember that far back in TV history). The show was funny, smartly written and perfect teaching material for someone like me who learns visually. I watched the shows (taped them on my DVR actually) and picked out my "favorites". Then I went to work. I watched the shows again, this time jotting down notes in my trusty legal pad. And I discovered something pretty basic. Short stories work almost exactly the same as longer stories. You just have to cut away all the stuff that isn't important.

Backstory can be done in just a couple of sentences.

Dialogue has to do triple duty.

Sadly, Love Bites got cancelled (doesn't that seem to happen to all the best shows?) but I'll always be forever grateful to the smiles it brought to my face and the writing wisdom it gave me.

How about you? Any tips for writing short stories? Now that I have one under my belt, I'm anxious to try my hand at more!


Get ready for the 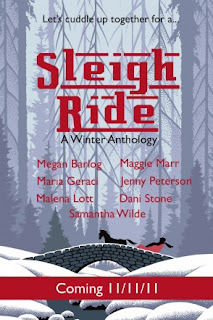 ultimate sleigh ride this November with Buzz Books. SLEIGH RIDE is a wintry mix of short stories with one common theme: each story includes a sleigh ride. The book will include seven short stories and a portion of the proceeds will benefit a national domestic abuse prevention fund via Alpha Chi Omega sorority. Women helping women is one of our highest endeavors, and we are extremely excited about the project.