Do You Have What It Takes to be a Cheese Whiz? Archaic Words

By Kathleen Kaska
When I worked at Cave Art Press, a small publishing company in Anacortes, one of my tasks was to write the weekly blog posts. It had to address writing styles, grammar and punctuation rules, and the down and dirty of publishing and marketing—and it had to be funny. These blog posts eventually became a tongue-in-cheek book entitled, "Do You Have a Catharsis Handy? Five Minute-Writer Tips." Here's one about archaic words and my own take on them.

Thanks to Google, I stumble upon many of my Writing Tips topics by accident. Here are some archaic (did they ever really exist?) but entertaining words and phrases that I discovered while I was researching other topics, along with some neologisms of my own:

With Squirrel: If you were a woman who lived in the Ozarks many moons ago and you found yourself “with squirrel,” then you were expecting a child. (Vance Randolph’s Down in the Holler: A Gallery of Ozark Folk Speech, 1953). I would call such a woman Squirrely.

Lunting: I suspect that Sherlock Holmes was into lunting—i.e., walking while smoking a pipe. (John Mactaggart’s Scottish Gallovidian Encyclopedia, 1824). I would call people who do this lunters.

The following are from The Word Museum: The Most Remarkable English Words Ever Forgotten, by Jeffrey Kacirk:

Spermologer: It doesn’t mean what you think. A spermologer is a columnist! Three of my favorites are Father Ron Rolheiser; Austin native, John Kelso; and funny-lady, Lisa Scottoline. In my world I’d refer to them as wittyosophers.

Queerplungers: An English term for a scam in which an individual jumped into water, was “rescued” by accomplices, and was subsequently taken in by rehab houses that cared for people who tried to commit suicide. In the benevolent society of the time, the rescuers were rewarded with a guinea each, while the person who “attempted suicide” was sent away with a monetary donation to make his life less depressing. Maybe a better word for these folks would be Scam Dunkers.

Tyromancy: If you can’t find a crystal ball, use cheese! One of my Cave Art Press colleagues thought tyromancy sounds like “a Jurassic love story.” In fact, it is the act of predicting birth, love, and death by reading the appearance of a piece of cheese. It is also the act of using cheese to answer questions: the most obvious answers to a question are written on pieces of cheese (one answer per piece). The pieces of cheese are fed to a rat. Whichever piece is eaten first is the answer to the question.

I suspect a person who engaged in this method of prediction and became notable would have been called a tyromaniac. I would call him a cheez-whiz.

This is my last post as a member of the Stiletto Gang, but I will stay in touch and follow you wonderfully, creative authors. 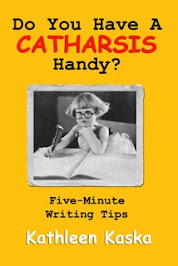 Kathleen is a Texas gal. Except for an eighteen-month hiatus living in New York City after college, she continuously lived in the Lone Star State for fifty years. Since then, Texas has been hit and miss—a little hit, but a hell of a lot of miss. There was a time when she thought she would happily die in Austin, Texas. But circumstances and weather—especially weather—changed that. Now she spends most of the year on Fidalgo Island in Washington State with a view of the bay and the mountains. When she gets homesick, she and her husband plug in the iPhone to Willie—as in Nelson. Soon they are dancing the two-step, imagining they are at our favorite honky-tonk in Tokio, Texas, where the mayor is believed to be a dog. Who wouldn't miss that?

Kathleen writes mysteries. She blogs about writing, publishing, marketing, animal rights, birding, and quirky things that come to mind. Go to her website: Kathleen Kaska and check out her latest blog series, "Growing Up Catholic in a Small Texas Town."