While doing some research on the history of cooking, I came across foodtimeline.org, created in 1999 by reference librarian and food lover Lynne Oliver and meticulously maintained by Lynne until her death in 2015. The site now is updated by the Virginia Tech Library system, which has a special collection on cooking history, including many volumes contributed by Lynne.

The timeline indicated that the first recorded menu was from ancient Sumeria. The source for that information was a few paragraphs from Betty Wason's Cooks, Gluttons & Gourmets: A History of Cookery (1962). The site indicated that Wason's book had an extensive bibliography, but this point was not footnoted.

I'm not in the habit of investigating unfootnoted documents, but Wason's paragraphs were so intriguing, I purchased the book. I found it absolutely delightful. She began each chapter with a description of the culture or time (including one chapter about cannibals), then followed that with a list of possible recipes.

Upon further research, I found out that Betty Wason had authored 24 books, most on cooking. Her The Everything Cookbook (1970) received rave reviews as a comprehensive guide. I ordered it and found it to be on a par with Betty Crocker or Julia Child. In addition, Wason had authored accounts based on her life like Ellen: A Mother's Story of Her Runaway Daughter (1976) and Macular Degeneration: Living Positively with Vision Loss (1998). Perhaps most astonishing was her first hand story of the Axis invasion of Greece, Miracle in Hellas.

Who was Betty Wason?

I returned to the Internet and learned that Elizabeth "Betty" Wason (1912-2001) was born in Delphi, Indiana, the daughter of a judge, and the graduate of Purdue University. Her first ambition was to be a dress designer, but after participating in a broadcast about cooking, she realized that journalism might be a way to see the world. She went to New York City and visited news organizations, telling them she was going to Europe and offering to be their correspondent. Transradio Press Service gave her a chance, then later she worked for CBS News, chronicling the events of World War II.

While CBS respected her reporting, its executives preferred a male voice on air. Phil Brown, a secretary at the American Embassy in Greece, read her copy with the introduction, "This is Phil Brown in Athens, speaking for Betty Wason."

After World War II, Betty returned to the United States, acclaimed for her work, but still unable to serve on air at CBS. She found other broadcast opportunities and pursued her passions of traveling and cooking.

Her books are well written, as if she is taking readers along on the journey. And, the recipes sound delicious. You may want to try some for the holidays. Maybe just not those from the cannibal chapter! 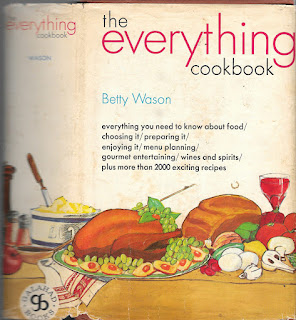