Research is a must for scientists and academic writers who either “publish or perish”. And it’s also a necessary activity for people who pen non-fiction, historical fiction, and science fiction.

But what about genre writers?

To me, authenticity is important in novels. Without it, readers lose interest. Plot, characters, setting, and time period are important elements that often should be augmented with research. For example, a character with a particular illness must be presented authentically, so research of symptoms and treatments could be important.

As a suspense and mystery author, I delve into police procedures, murder weapons, guns and how to use them, and even the interior of ambulances. Settings form an important element in my novels ─ I often place my stories in foreign countries. To make the reader feel they are experiencing that locale, I do online research. Before completing a manuscript, I take a trip, camera in tow, to check out my locations. I want to verify I’ve described the environment as accurately as possible, including geography, culture, architecture, historical facts, or even practical items such as how the police are organized in another country.

Before completing my last novel, Revenge in Barcelona, my husband and I traveled to Spain. We spent time imbibing the culture, sampling the food, verifying historical tidbits, and touring architectural sites I’d built into the story. Plus a friend in Barcelona set up a meeting with an antiterrorism agent (who remained anonymous) to discuss the various police and counterterrorism forces working in Catalonia, the part of Spain where the tale happens.

Early in the manuscript, I had protagonist Nikki Garcia and her fiancé visit Franco-Cantabrian caves containing paleolithic art. I’d built scenes where the antagonist followed them, just out of sight, through these isolated parks. I’d personally visited the caves to get them right. While editing the manuscript, I realized the cave section did not fit the story or add real intrigue. It was an information dump. So I cut that adventure, retaining only a couple of passing mentions to the antiquity of cave art since it’s in keeping with Nikki’s character and her love of ancient archaeological history.

How did I realize I had an info dump? Following my rule that research incorporated into fiction should be balanced, I’d highlighted my research in yellow as I wrote to keep track of it. Upon editing the work, the unnecessary research popped out ─ I was literally tripping over my research.

Have you ever researched so intensely that you’ve incorporated an information dump into your writing? 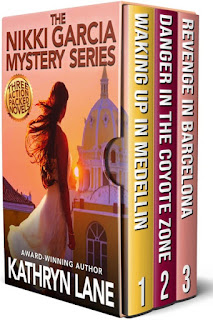