Where to Live? A Guest Post by Lena Gregory

I’ve lived most of my life in a small town on the south shore of Eastern Long Island, along with four generations of my family. My grandfather owned a deli in town, where I started working stocking shelves and sweeping floors when I was twelve years old. When I was a little older, I started working the breakfast shift, the inspiration for the All-Day Breakfast Café Mystery series.

I’ve always loved the small-town feel, the way everyone knows everyone, especially the families who have lived here for generation after generation as mine has. When I married a man from the neighboring town, it seemed natural to settle down where we’d grown up and start our family.

Then my husband got a job offer in Florida, and he accepted. We moved down right after my daughter finished kindergarten. I had only ever been to Florida once, when my daughter was three and we spent three days in Disney World, so I had no clue what to expect.

Just like Gia Morelli in Scone Cold Killer, I was in for a few surprises. 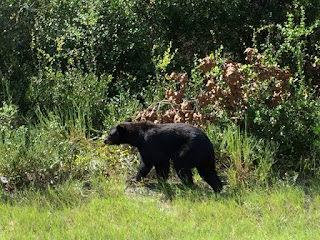 I was used to deer crossing signs, since Long Island is home to a large deer population, but the first time I drove my daughter to school and saw a bear crossing sign, I actually turned around and went back to see it again. I thought I was mistaken, but nope, it was a bear crossing sign. Until that moment, I had no clue there were bears in Florida.

Then there were the love bugs, and they were everywhere. And lizards, which I’d never even seen in real life before I moved, and snakes, sometimes venomous ones.

In the All-Day Breakfast Café Mystery series, Gia suffers more than one run-in with Florida wildlife. As the series progresses, she gets more used to some of the creatures native to her new home, but others continue to terrify her.

Aside from the critters, Florida’s weather brought a few surprises for me as well. On the rare occasions Long Island gets tornadoes, they are small F-1s that do very little damage. One night, about six months after we moved to Florida, I had just gotten into bed and turned on the TV, and the weather report came on. A line of damaging storms was coming through. The reporter said if you live on my road, “take cover now,” and I freaked out, to put it mildly, woke my daughter and stuffed her and my dog into the tub, even tried to wrestle a mattress into the tiny bathroom. (That was so not happening.)

When a line of damaging storms tears through Boggy Creek, Gia is forced to deal with yet another new downfall. Fortunately, she learns a few lessons about living in a small town and how the people pull together in times of need.

Gia moves from Manhattan to a rural area just south of Florida’s Ocala National Forest. The enormity of the forest frightens her at first, especially when she thinks about everything that’s probably living in there, and she has a terrible time trying to fall sleep in all the quiet. Eventually, she comes up with an inventive way that reminds her of home to help her sleep.

Like Gia, whenever I got homesick, I spent a lot of time checking off the positives and negatives of living in Florida and New York.

Because there were also amazing things about living in Florida. The natural springs, with their crystal-clear water, gorgeous blue skies—even in the winter when the skies in New York are permanently gray. And who could complain when everyone in New York was shoveling out from under a foot of snow, and I was lying by the pool?

In the end, my decision was made for me when my husband and I both got job opportunities in New York. We ended up moving back to New York and visiting Florida every year because we missed it so much. Until last year, when I retired from my day job and we returned to Florida, this time to a bit more rural area, and I absolutely love everything about it.

Gia is still weighing her options and missing fall in New York. But when Savannah talks her into participating in the local Haunted Town Festival in A Waffle Lot of Murder, she can’t help but realize Boggy Creek is going to be her permanent home, and she wouldn’t change it for the world.

What about you? Have you ever had a hard time deciding where you wanted to live?