I'm putting this out here so y'all can call me out in case I don't follow through. Ha. How's that for being an obliger? Yes, that's me.

The title is Cathy's Corner. The hero has moved to this small southern town to open a restaurant named after his recently deceased wife. The heroine thinks this is a really awful idea, the name, not the restaurant, ... actually, she has issues with the menu too.

And, here's a cover that I created for fun. Not the final. Bear with me. I've hired an editor and cover designer. 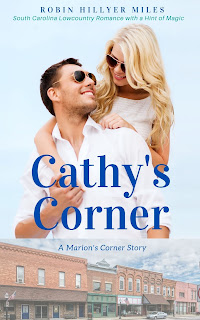 Sue Fisk stretched her fingers to reach the remote without disturbing Charley, her terrier-mix rescue, who stretched boneless and warm across her unclad feet. She flipped her television to the proper channel and snuggled down into her thrifted blue velvet sofa, a nod to her late parents’ love of all things Elvis.

She’d accepted the charity of a hand-me-down Blackberry™ phone from her uncle/boss when she’d dropped her flip phone in Lake Moultrie the other week. The Blackberry which now vibrated sharply, startling Charley who looked behind her like she’d farted and wanted to blame someone else. Sue laughed, squinted at the text, and muttered, “I make it pretty clear not to disturb me on Monday nights when I’m watching my show.”

Hey. What channel is Longmire on?

She stared at the screen trying to figure out the sender.

Her phone buzzed again seconds after the final scene. The number from earlier appeared on the screen. It didn’t look familiar, but since the lake incident, she’d been piecemealing her contact list back together. She’d learned her lesson about backing up her phone, maybe. And while her meticulous mother’s address book would have come in handy, she’d tossed every cigarette smoke-infused item in the house into the garbage the day after her parents died of lung and throat cancers within hours of each other. She bent her head to read the recent text.

I loved the familiar faces in this show. This is the pilot, right?

Yes. The new season begins at the end of May. They’re re-showing last season.

Thanks for the tip. Sleep tight. Don’t dream about murder and mayhem …

Furrowing her brow, she studied her phone. Her small circle of friends teased her about her favorite emoticon, who was this?

I’m sticking my tongue out at you.

I’m going 2 need to learn more about texting 2 keep up. Enjoyed the show.

The next morning, Fisk Design & Print Shop’s squat square cement-block building glimmered in the morning light as she pulled into the rear parking lot. Joyce, the co-graphic designer, sat in her car and gestured toward her radio when Sue tapped on her window. Sue opened the passenger door and joined her for the last few minutes of the reading of the Tuesday morning Piggly Wiggly weekly specials on the local radio station. Curtrice Collins, Sue’s best friend, and next-door neighbor read the items with enthusiastic glee. At promptly 7:58 a.m., Joyce’s phone alarm beeped alerting them to get to the office door.

Robin Hillyer Miles is published in an anthology. Look for her short story, West End Club, in Love in the Lowcountry, by Lowcountry Romance Writers of America, on Amazon.

You can find her author page on Facebook at https://www.facebook.com/RobinHillyerMilesAuthorTourGuideYoga

Posted by Robin Hillyer Miles at 8:30 AM