“Sam, did you just have Will drive you home so he would pay for our take-out?” Jenna whispered, draping her friend in a throw blanket.

“Yes,” Sam whispered back without a hint of guilt. “And if you were a real friend, you would go over there and spill something on him, so he would have to take off his shirt.”

“I'm starting to think Chase was right. You are not that injured,” said Jenna. 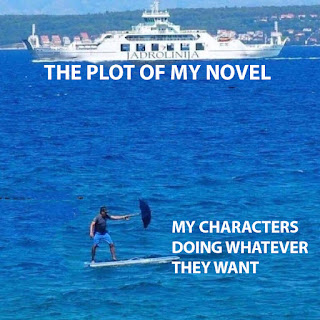 In my upcoming novella, Love and Treasure, I have two couples stumbling their way toward love. The main couple, Chase and Jenna, know they’re attracted to each other but the events of the story conspire to keep them apart.  But Samantha and Will are the bumbling side-kicks who haven’t quite realized that they’re destined for each other. Originally, Will, the straight-laced descendant of the town founder was intended to be the villain of the piece.  But as I wrote he won me over with his goofiness and well-intentioned, but occasionally misguided, desire for historical accuracy.  (In case, you’re wondering, I, like my hero pirate/stunt man/ restaurant owner Chase Regard, draw the line at historically accurate bathrooms.)

For the most part, my characters do as they’re told.  The bad guys set about their purpose with a Shakespearean-like intention to block the heroes.  And the heroines and heroes go about the business of saving the day without too much complaint.  However, every once in a while one of my characters simply turns up with extra personality and tries to turn the ship.  Sometimes I fight for control and other times… Well, who am I to deny true love?  Will and Sam are clearly destined for each other and only the meanest author would try to block that. 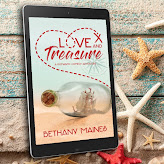 Love and Treasure is a modern day, stand-alone romantic comedy novella, reminiscent of the Gilmore Girls. If you like sword fights, treasure-filled caves, and laughs while a feisty heroine and rakish hero struggle to find their happily ever after, then you need Love and Treasure.  Love and Treasure will be available 7/21/20.  Learn more and pre-order:

Bethany Maines is the award-winning author of the Carrie Mae Mysteries, San Juan Islands Mysteries, Shark Santoyo Crime Series, and numerous short stories. When she's not traveling to exotic lands, or kicking some serious butt with her black belt in karate, she can be found chasing her daughter or glued to the computer working on her next novel. You can also catch up with her on Twitter, Facebook, Instagram, and BookBub.
Posted by Bethany at 4:30 AM