Mysteries in a Series - In Order or No?

by Mary Lee Ashford aka 1/2 of Sparkle Abbey

Do you like to read books that are part of a series? And, if you enjoy reading series fiction, do you always read them sequentially?

When asked most authors will say that each book stands alone and that they don't neccessarly need to be read in order. And, of course, that's the goal, right?

Whether it's the tenth book in the series or the first, the goal of the writer is always to create a story that can stand on it's own. A self-contained adventure that doesn't rely on the reader knowing something that's not on the page in the installment they're reading.

Many well-known authors with long-running series, such as the late Sue Grafton with twenty-five books from "A is for Alibi" to "Y is for Yesterday" or Janet Evanovich, who is headed for her twenty-sixth Stepanie Plum novel, have purposely created story arcs (and character arcs) of limited changes.

Others such as G.A. McKevett aka Sonja Massie, author of over seventy books, defty uses life changes and character growth to add richness to her plots. Her latest "And the Killer Is..." is on my bedside table right now.

And then there's yet another approach. The inimitable Laura Levine, simply tells you, the reader, in an aside what you need to know. "You'll have to read about when that happened in..." And though I was always taught that author intrusion is something to be avoided at all costs. I'll be darned if it doesn't work just fine when she does it.

You know, I have to say that I enjoy each of these different approaches to storytelling.

But I also have to admit that my preference is always to read a series in order. I like getting to know the people and the places as the series unfolds. Occasionally, I have started with a book that was in the middle of a series. Usually because a friend has shared it or it was part of a conference giveaway. But if I really enjoyed the story, I'm going to track down book one and start at the beginning. Otherwise, to me anyway, it would seem like starting with season three of Downton Abbey or any other great continuing television series. I want to be a part of the story from the beginning.

Is it just me?

How about you? Are you a reader that always wants to read a series in order or do you not care about reading the books strictly in order? 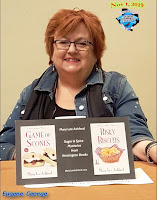 Mary Lee Ashford writes the Sugar & Spice mystery series for Kensington Books and also writes as half of the writing team of Sparkle Abbey, authors of the Pampered Pets series from Bell Bridge Books.

GAME OF SCONES is the first book in the Sugar & Spice series.

DESPERATE HOUSEDOGS is the first book in the Pampered Pets series.

Leave a comment to be entered in a drawing for both of these "first in the series" titles. Or if you already have them both, any book you're missing in either series!
Posted by The Stiletto Gang at 1:00 AM