Sam, their son, threw a rock into the creek. “Kerplunk!” he said as he jumped up and down punching fists into the air.

Cameron smiled and turned James, her husband, to share in the joy of a perfect child.

“He is fun,” James said in reply to her smile. 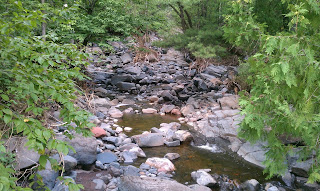 He put his arm around her shoulder and gave a quick squeeze as they watched their progeny run off the bridge to the hiking path to gather another rock in the perfect proportions to make the “kerplunk” sound. Cameron’s family had farmed and enjoyed the bridge, the path, the entire fifty-acre park on the small mountain in the hills of South Carolina since they’d arrived from Scotland in the 1700s. Now a thousand years later their small family enjoyed their land with the lingering ghosts of ancestors’ and former occupants’ past.

James checked his watch. Nodded at Cameron. Gave his wife a deep kiss and turned to walk back to the family cart.

Thirty minutes’ later Cameron and Sam had set up a picnic on the flat rocks that bordered the creek. A checked cloth covered the broad expanse of granite. They had set platters of fresh vegetables and fruit accompanied by clear tall bottles of water out. Sam jumped up and down, waiting in anticipation for the rest of the family to arrive.

Within minutes James hurried to join them. He kissed Cameron. He gave Sam a ride on his shoulders and set him down on a small chair set up next to the make-shift table and then sat in the chair that sat empty waiting for him.

“How was work?” Cameron asked as she spooned the food onto his plate.

“Good. It was a long shift. I told them I can’t do any more than twelve hours as it confuses our boy,” James smiled at his son. “James was late though…” he whispered this bit into Cameron’s ear.

“We’re together now. Is that enough?” She asked.

They finished their meal and took a family walk on the rest of the path to the top of the mountain. At the lookout point, they paused and took in the town's view below. Lights glittered from various train head and taillights. Streetlights only glowed in the street to show the way when something triggered them and weren’t visible from above. The streets had become mobile and fluid and flowed with the rising earth and waters drove the commuter trains. Personal carts for families and individuals traveled less than fifty miles to the nearest train station and home after a short energy regeneration from the sun.

James turned to Cameron, “It will be okay. We are near the end. Only a few more months and we can retire and enjoy our time together on the farm.”

“Yes. Yes. I know.” Cameron leaned her head on James’ shoulder and took in his body warmth, his scent of cedar, and a slight hint of lavender. She called Sam to their side, and they walked down the mountain to the family cart.

She had less than twelve hours with this James and she wanted to make every moment count as the sunset over the horizon.

Half a day later the other James came home and planted a kiss on her cheek to awaken her.

“I made coffee, and I whipped the eggs for breakfast. I will take a quick shower and join you.” He fluffed the pillow next to his wife to remove the indentions from the other husband and headed to the master bathroom.

Cameron rolled over, eyes filled with sleep, and ran her hand over the pillow still warm with James’ touch. She pictured him there, short inky hair that curled over his ears if left too long between haircuts. His nose, not too short or long, in profile like a regal nose to her. Their hands touching, his long fingers encircling her small ones as they slept their limited time together. She sighed, edged herself to the side of the bed and set her feet on the floor. James had left a folded piece of paper on her bedside and she snatched it up and pressed it to her heart with both hands.

The other James called from the shower reminded her that needed to hurry and awake Sam to go to school.

She padded over to their son’s room and opened the curtains to let in the natural light. She stood for a moment, still clutching the note to her chest with one hand as she used the other to play with the window lock, opening and closing it. Noticing that if it were open or closed, you could only tell the difference if you looked at it from the right angle. Which was it? Did it matter? Are you happy with it being open or shut? Are you safe with it either way? She turned it once more, ensuring it set in the open position and read her note.

She allowed herself one small sigh. She tucked the note into the diaper bag. The bag that sat in the corner of her closet. No one else had opened the bag in over four years since Sam was a toddler and six years before new James arrived. She walked across the tile floor and kissed her child on the forehead. She urged him out of the bed and into school clothes before she headed down the stairs to the kitchen and the fresh day that awaited her.

James sat in one of the swivel chairs at the kitchen island and twirled their son around the one next to him. The boy giggled. The man spun the chair harder.

“You will make him sick,” Cameron said as she plated up the eggs, vegetarian bacon, and whole wheat bread onto three plates.

“Can Daddy take me into school today?” Sam pleaded.

Cameron glanced at James who gave her the “it’s our time” look and she shook her head at the child. “Not today, sweet cheeks, Daddy, and I have plans.”

The trip to the council would take a few hours and James had to get some sleep beforehand.

Neither James’ seemed to be able to fall asleep without her being in their arms. Both James’ wanted to make love to her a few times a week. They seemed to know when the other had their turn and would never ask for one within twenty hours of the other. Cameron insisted that one night a week she took off. Time with them was getting short. The other James wouldn’t be here much longer. She needed to arrange a way to hide that she’d been with him so the other one wouldn’t know.

Later in the week, after a long, grueling meeting at the council, with the monies paid, with the “retirement” imminent, she had to get out of the house without either of them. Sam and she traveled to the path again and so he could play “kerplunk.” She rocked back and forth on a root from a rather ancient oak and begged her body and heart to comply with what her brain had agreed to do before the other James became approved, created, and showed up at their house.

Cameron played “kerplunk” a few times herself and as she leaned over a rock bed to pick up a new stone, she noticed her wedding ring had broken in half. Her diamonds had sliced into thin pieces that scattered in the sudden wind that had picked up in the valley. She silently screamed in horror. The pieces wouldn't fit together. The diamonds had shattered to the point there was no way to repair them.

Cameron saw their son fall to his knees and look at her with terror in his face. He called her for help, reached his arms out to her, but her feet didn’t move and her fingers desperately searched for the bits of diamond in the sand. She tried to gather the pieces of diamond and gold band to meld them back into the oneness that had existed on her left ring finger to no avail.

"James," she whispered. Behind her came the sound of footfalls on dry leaves.

I hope you've enjoyed this short story. It came to me in a dream last year. I woke up and wrote it down. I hope to one day expand upon it and then you'll find out what happened to James or James. 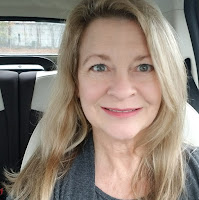 Posted by Robin Hillyer Miles at 8:00 AM