Judy Penz Sheluk here. Today is the first Monday and I should be posting but when I heard that Elizabeth Duncan was releasing Remembering the Dead, #10 in her fab Penny Brannigan mystery series set in North Wales, I had to invite her to take my spot. Today, Elizabeth joins us to answer the question, “Why Wales?” 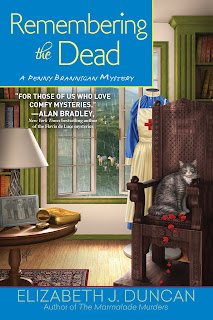 Why Wales? I get asked that a lot.
Do I have family there? Sadly, no. Friends? Happily, yes, I do now.
In the spring of 2004 I fell in love with the North Wales town of Llanrwst. Situated on the bank of the River Conwy, with its thirteenth century teahouse, three-arched seventeenth century bridge, cobbled town square, and grey stone buildings with slate roofs, Llanrwst (pronounced Clan-roost) struck a nostalgic chord. What a perfect setting this charming place would make for a cozy mystery, I thought. At the time, I had no intention of writing a book, but then … a few months later, and out of nowhere, I started writing The Cold Light of Mourning, which became the first book in the Penny Brannigan mystery series. And without giving the question of where to set the story a moment’s thought, I dived right in because I knew exactly where the story would take place.
That was 15 years ago, and since then, I’ve come to know my bit of North Wales well. I now spend five months there each year, exploring those lush green hills and forests, enjoying the natural beauty of the area’s rugged good looks, and looking for the right location to hide a body or stage a murder. Although I’ve fictionalized the town as Llanelen, local landmarks, including Conwy Castle (A Killer’s Christmas in Wales), Gwrych Castle (Murder Is for Keeps), St. Gwrst Church (The Cold Light of Mourning), the Llechwedd Slate Caverns, near Blaenau Ffestiniog (Slated for Death), and Lake Sarnau (Murder on theHour), to name just a few, have all figured prominently in the novels.
I didn’t know back in 2004 what I know now. How important setting is in establishing atmosphere and mood, bringing stories to life, and captivating readers. But it’s about more than a geographic backdrop: it provides the social context for the characters -- so important in the cozy mystery genre, where the setting is usually a small town, and the characters all know one another. Llanrwst ticks all the boxes.
Literary considerations aside, it’s important for an author to like the place where her books are set because one way or another, she’s going to spend a lot of time there. Either literally, or in her head. Fortunately for me, North Wales has become not just a big part of my writing, but the best part of my life. 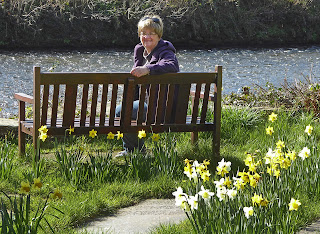 ABOUT ELIZABETH J. DUNCAN: A two-time winner of the Bloody Words (Bony Blithe) Award for Canada’s best light mystery, Elizabeth J. Duncan is the author of two series of traditional mysteries: the Penny Brannigan series set in North Wales and Shakespeare in the Catskills featuring costume designer and amateur sleuth Charlotte Fairfax. A former journalist, public relations practioner, and college professor, Elizabeth is a faculty member of the Humber School for Writers. She divides her time between Toronto, Canada, and Llandudno, North Wales.
Her books are available at all online and brick-and-mortar bookstores.
Connect with Elizabeth J. Duncan around the web:
www.elizabethjduncan.com
www.facebook.com/elizabethjduncan
Follow her on twitter: @elizabethduncan
and sign up to receive an occasional newsletter: http://elizabethjduncan.us7.list-manage.com/subscribe?u=7241f3c797c10f58037766635&id=f02d30b07c
Posted by The Stiletto Gang at 3:00 AM