Guest Post: Arlene Kay
Today Sparkle Abbey welcomes Arlene Kay to The Stiletto Gang as our guest. Her topic is Pets in Mystery Fiction, a topic that's near and dear to our hearts. Here's what she has to say... 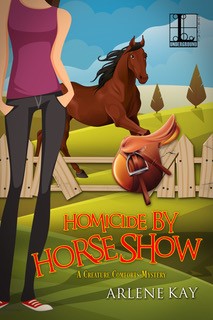 A recent poster on a mystery blog lamented the overuse of cover art featuring pets. False advertising, she charged! Many of these novels barely mention a dog or cat yet their images are used to entice cozy readers. As a mystery writer and ardent animal lover, I offer a different perspective. Occasionally a pet may grace a cover without any connection to the novel in question but that is uncommon. Animals are and have always been intimately connected to crime fiction in different ways. Even the great Sherlock Holmes, hardly an animal lover, frequently relied on the scenting prowess of Toby the hound and in Silver Blaze, the key clue was provided by the guard dog that didn’t bark.

Some novels may feature service/military dogs, whose official job it is to help catch criminals or simply animals that further the exploits of their human partners. For instance, the late Virginia Lanier’s series featured tracking dogs, while Diane Kelly’s “Paw Enforcement” series includes an intrepid K-9 officer and his human partner. One of my all-time favorites, anchovy lover Lulu the Basset Hound, the brainchild of author David Handler, is the tireless pal of ghostwriter Stewart Hoag. Other examples abound. Rita Mae Brown co-authors the Mrs. Murphy series with her tabby Sneaky Pie Brown. Mrs. Murphy, a spunky feline, marshals her animal pals to help and occasionally save their human mama, Harry, from harm. In each of these novels, animals play an active and integral part in resolving the mystery.

For many authors, animals are a constant presence in our novels as they are in our own lives. While pets may stay in the background, they help to define the protagonist and advance the plot. For instance, Keats and Poe, (part of my Creature Comforts series), are retired military canines who join a rag tag band of rescues residing with Persephone Morgan. They may not solve the puzzle, but they sustain their human caretaker and enrich her life. Fans of Lillian Jackson Braun’s “Cat Who” series know that the contributions of Koko and Yum Yum were only vaguely connected to the mystery at hand, but they defined Jim Quilleran as a most sympathetic character.  I ask you, who can resist a man who nurtures and loves felines?

From pet salons to dog shows, our animal friends provide fans with a host of venues and plot devices that enhance their reading pleasure. Perhaps that old saw is actually true: you can tell a book by its cover! 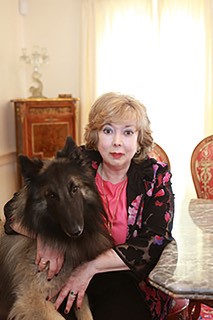 An artful combination of humor, satire and savagery make Arlene Kay’s tales unique. The published author of nine mystery novels, is a former Treasury executive who traded the trappings of bureaucracy for the delights of murder most foul. She wisely confines her crimes to fiction although like all mystery writers she firmly believes that most deaths are suspicious, and everyone is a suspect. Her Creature Comforts series from Kensington (Lyrical), includes Death by Dog Show; Homicide by Horseshow; and Therapy by Murder.