Experiencing Noir at the Bar 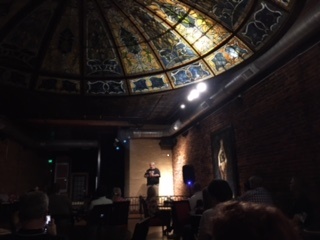 When I think about writing or film described as “noir,” the words bleak, cynical, dark, and fatalistic come to mind. I’m immediately reminded of black and white movies, usually produced during the 1930s or 1940s and often featuring Humphrey Bogart. In a list of Bogart’s top 31 films, 13 of them are identified as noir.


In Noir at the Bar: An Oral History, written by Keith Rawson in 2014, a more recent phenomenon of crime authors reading their noir short stories or passages from longer works, originated in 2008 in Philadelphia, then spread to St. Louis and Los Angeles. Events often take place in conjunction with a mystery conference, but may be “stand alone” evenings organized by local writers groups.


Noir at the Bar arrived in Newberry, South Carolina, a small college town near the center of the state known for its famous Opera House, on October 10 when Dr. Warren Moore, an excellent author and Professor of English at Newberry College, organized an event at Bar Figaro. He selected the perfect location. Bar Figaro offered a tiffany domed, brick walled, atmospheric backdrop for readings by professors Dr. Moore and Dr. David Rachels; former students Kasey Stuart-Schroer and Karina Tarbell; and invited guests, including Lawrence Block, who was spending a semester at the college as Gerding Writer-in-Residence; Block’s daughter, Jill D. Block; North Carolina author and filmmaker Eryk Pruitt; and S.A. Cosby, who read his Anthony nominated story, “The Grass Beneath My Feet.”


Each author captivated the audience with somber, evocative works in the tradition of Edgar Allan Poe. Their presentations offered the perfect entertainment for an October evening. And, the door prizes given between readings added to the fun and the introduction of readers to new authors. Dr. Moore promises that more events will be planned for the future. I’m delighted this program has made its way to our community and look forward to attending more Noir at the Bar.
Posted by Paula Gail Benson at 12:00 AM