You must do the thing you think you cannot do. 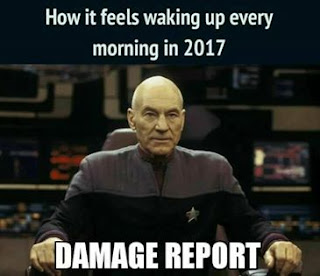 This photo sums up how I've been feeling lately. It's an internet meme that's really all about the political chaos and turmoil we're all facing every day in 2017—or so it definitely feels. And while it's absolutely appropriate for that part of my life and everyone else's right now, unfortunately it fits just about everything in my life at this moment.

National politics completely aside—which is definitely something to say since it's been such a dumpster fire this year--the new year came in mean and rough in my homestead. We'd decided a month and a half earlier to downsize our lives, sell our big old house, and move to a much smaller, newly renovated with new everything, single-floor dwelling, and I was excited about it, although I dreaded the necessary trial of purging 42 years of family life and possessions. For that month and a half things went well. It was exhausting, and my husband and I weren't happy to realize that it was going to take even more time and work than we'd originally thought—where did all this stuff come from?—but I had scheduled our necessary work, step by step and room by room, and we were making good progress.

On the last day of the year, however, I was scheduled for my regular six-month chemo infusion. I had planned for this in my schedule, marking at least a week out of use. I had come to the point where the chemo only really made life difficult for me for a week or so. I'd found ways to get around the longer-term issues and manage to work with them bothering me anyway, so I only expected to really lose one full week. This time, however, I had to have an extra infusion because my blood tests weren't as good as they should have been, and this new infusion blasted out a month from my schedule. I was knocked flat for almost 30 days that I hadn't anticipated losing. I rescheduled with our buyers.

At the end of that month, I started being able to work on the house again and worked furiously to try to make up time. In a little over a week, though, I had to leave for AWP in Washington, DC. I lost a week to AWP and came back in bad shape, so I lost a few days after arriving home to recovery. Just as I began to get on my feet again, the illness that had been circulating at AWP and forcing a number of attendees to spend all or part of their time confined to their beds hit me, as well. There went another ten days. So I've basically lost the first two months of this year, and the move that I thought we'd be able to make in March is more likely to take place in May or early June. 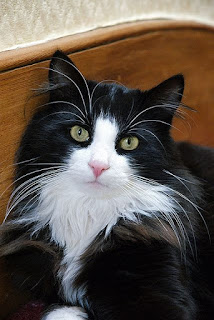 On top of all that, we arrived home from DC to find that our elderly cat, whom we never think of as elderly because she's always been so spry and active and youthful, was ill. After consultations with the vet, it became clear that she is probably dealing with a terminal illness. We have opted not to go with any invasive procedures since she's not in pain nor likely to be, according to the vet, but simply weakening and slipping away. She was a rescue and is terrified of the vet's office or anywhere but home (which is why we always make arrangements to have her cared for in our home when we have to leave). For now, we are trying to tempt her to eat and spending a lot of time giving her affection, and she actually seems to be getting better. The vet says she might even spring back for a while, a month or even a year or so. Either way, when her time is up, she will go peacefully in her home with the people she loves around her.

Minnie (short for Mrs. Miniver) is the best cat I've ever had, and I've had cats most of my life. She's the smartest and best behaved. She knows the rules of the house, and she never breaks them. She's a great mouser. She's sweet and affectionate. She hides when strangers come—as I said before, she's a rescue and had a rough life before coming to us fifteen years ago. When we brought home our most recent dog, a large, boisterous, bumptious hound, Minnie quickly established her dominance, and to this day, she bosses him, who could eat her in one mouthful, mercilessly.

Thus, slowly and weakly, I'm getting back on my feet, way behind on my downsizing, and nursing a probably-dying cat, all in an America run by people who not only don't seem to know anything about it, but who seem to be determined to destroy it, with new reports of possible treason daily. And each morning does seem to be a major damage report. So I remind myself each day of what the great Eleanor Roosevelt once told us and demonstrated over and over in her own life. “You must do the thing you think you cannot do.” And get up to start dealing with it all once again.
Posted by Linda Rodriguez at 12:00 AM