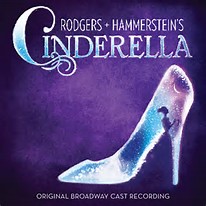 Are you familiar with the new Cinderella? I mean the Rodgers and Hammerstein musical that played on Broadway from 2013 to 2015 and now is touring around the country? If you haven’t had the opportunity and get the chance, please go see it, particularly if you were enchanted by its television predecessors, the first with Julie Andrews (1957), then Lesley Anne Warren (1965), and Brandy (1997). Here’s the website for the touring schedule: http://cinderellaonbroadway.com/tour/
Just be forewarned: this is not your traditional Cinderella story. This is a new empowered Cinderella, who helps to bring out the leadership capabilities in the man she comes to love. If you think I’m kidding, take a look at the cover for the Broadway original cast album, which also is the national touring company’s poster. It doesn’t feature a beautiful girl in a pumpkin carriage, or with a glamorous Fairy Godmother, or even with a handsome Prince. Instead, it shows a large glass slipper and inside the glass slipper is the image of a girl holding a glass slipper looking up at a crescent moon. One poster also has the log line: “glass slippers are so back.”

So what’s the history of this phenomenon? It was actually written as a television musical with Julie Andrews as Cinderella. According to Wikipedia, the original production had to fit into a 90-minute time slot with six commercials, so Oscar Hammerstein wrote it in six short acts, which he said took seven months.

I remember seeing the Lesley Anne Warren version and being captivated by the songs: “In My Own Little Corner,” where Cinderella explains how she deals with a harsh world through her imagination; “Impossible,” in which the Fairy Godmother sets the magic in motion; “Ten Minutes Ago,” with Cinderella and her Prince realizing their instant attraction while waltzing; “The Step-Sisters’ Lament,” gleefully demonstrating the pangs of jealousy (“With very little trouble/I could break her little arm”); “Do I Love You Because You’re Beautiful,” has the Prince contemplating his doubt upon Cinderella’s disappearance; and “A Lovely Night,” shows Cinderella relishing the upper hand as she describes a ball she couldn’t possibly have attended (“I do not know these things are so/I only can suppose”).

While the first two television versions followed the traditional story, the third had Cinderella running away from home after particularly cruel treatment by her step-mother. The Broadway and touring company version begins with the Prince (now called Topher instead of Christopher) battling a dragon and heading home from school to take over his princely duties. A trusted mentor has been handling the kingdom’s business pending Topher’s return and hopes to continue to do so by making Topher a puppet ruler. Meanwhile, a revolutionary character, Jean-Michel, is standing up for the rights of the common people, while ineptly romancing one of the step-sisters. When the mentor seeks to distract Topher’s attention by having a ball to find a bride, the more familiar part of the story begins, with certain distinctions. One difference is that the Fairy Godmother is a local “crazy” woman, to whom Cinderella has been kind. Another little twist is that the first act ends with Cinderella losing her slipper on the stairway, then going back to retrieve it before Topher can get it, making all of us wonder what the second act may have in store. Never fear. There’s another event at the palace, where Cinderella introduces Topher to Jean-Michel and the common people, then leaves behind her slipper before vanishing.

In each television and stage version, the names of the step-sisters changed: Portia and Joy (1957), Prunella and Esmerelda (1965), Calliope and Minerva (1997), and Charlotte and Gabrielle (2013 on Broadway). I may be wrong, but the mystery writer in me noticed that Douglas Carter Beane, who wrote the new book for the Broadway version lists a daughter Gabby in the credits, so I’m guessing that may be the reason for the name Gabrielle as well as a change in character so that Gabrielle becomes Cinderella’s confidant instead of her adversary.

After we saw the stage production, John W. Henry, my theater buddy, who remembered well having produced a local production of the original show, asked me what story had been incorporated into the new version. I had to think about this question a while, but I finally decided that it was a reverse of the Beauty and the Beast plotline, where, instead of having to fight off the angry villagers, Cinderella gets Topher to champion their cause.

I enjoyed this version because when teaching short story writing, I have often used the Cinderella model to show structure. The problem is that if you stick with the traditional tale, Cinderella has things happen to her and never takes a proactive role. I encourage my students not to let that happen with a protagonist. I’m glad that the people behind this new production took my advice!
Posted by Paula Gail Benson at 12:00 AM