Tomorrow is my third book release this year. You’d think by now I’d be used to that queasy, what-if-everyone-hates-it feeling in my stomach. That feeling alternates with spikes of what-if-everyone-loves it euphoria.

Every so often, a tiny rational part of my brain says, “Deadlines.” Please note the “s” at the end of that word.

The emotional part of said brain ignores this dire reminder.

Truly, my ability to string words into coherent, interesting sentences is seriously impaired. So rather than torturing you with inanities, I’m sharing an excerpt from Guaranteed to Bleed.

If you like what you read but prefer to read books in order and haven’t read The Deep End, this is your lucky day! Book one of the Country Club Murders is on sale for $.99. 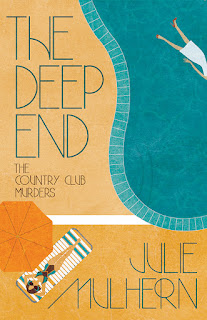 Without further ado from Guaranteed to Bleed...

Silhouetted by the lights in the street, Anarchy Jones was still identifiable. He reminded me of a sheriff in a western who’s just pushed through the swinging doors to the saloon. One who doesn’t much care for what he sees.
My hands—even the bleeding one—shook. How could I explain away a comatose date, a crossdressing brawl and a bloody wrist?
Anarchy crossed the room in a few strides. He stared at me for a moment, his eyes scrunched as if he was trying to find answers without actually speaking to me. His gaze shifted to Upson. “Is he dead?”
“No.”
“Are you sure? Usually when I see you, someone’s been murdered.” The man had a point. 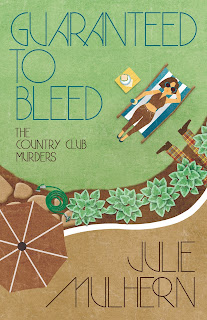 Julie Mulhern is a Kansas City native who grew up on a steady diet of Agatha Christie. She spends her spare time whipping up gourmet meals for her family, working out at the gym and finding new ways to keep her house spotlessly clean--and she's got an active imagination. Truth is--she's an expert at calling for take-out, she grumbles about walking the dog and the dust bunnies under the bed have grown into dust lions.
Her first romance was a finalist in the 2014 Golden Heart® contest. That book, A Haunting Desire, released July 28, 2015.Julie also writes mysteries. The Deep End (available now) is her first mystery and is the winner of The Sheila Award. Look for book two, Guaranteed to Bleed, October 13, 2015.
Posted by Julie at 2:00 AM