Haunted Places in Real Life and in My Books

Over the years I've had a fascination with haunted places and have stayed in a few.

The Queen Mary is supposed to be haunted--and has a tour with some special effects added. However, I once was there for a conference and many of the photographs taken during the awards ceremony showed that we'd been visited by tiny orbs of light. When I went down to my room after the ceremony and got off the elevator, nothing looked as it had before and I couldn't find my room. I had to go to the center of the ship and come back--and then all was returned to normal. Something to do with the haunting? I have no idea, but it was definitely weird. 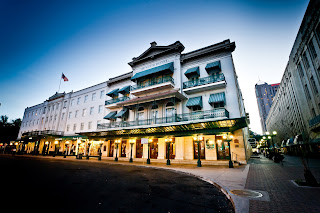 The historical  Menger Hotel in San Antonio is another place that's haunted. No, I didn't see any ghosts, but I may have heard one. While trying to sleep, someone kept knocking loudly on the door or another room, I finally poked my head out and though the knocking continued, no one could be seen.

The Bella Maggiore Inn in Ventura CA is another haunted spot--Room 17 in particular. Yes, we asked to stay there and were warned it was haunted. This old bed and breakfast was once a boarding house which you can tell. A previous time we stayed there, the room we had once had a Murphy Bed which is now the closet and the bathroom had obviously once been a kitchen.

The haunted room was much smaller--and our ghost didn't show up. However, my daughter said that was because I was there--the ghost is supposed to be a prostitute and I guess hubby would have had to be alone to be visited. However, the whole place has the ambience of being haunted.

Then there's the Santa Maria Inn. It has two parts, a modernized hotel on one side, then the old hotel where the movie stars once stayed. We've stayed there several times. In the old part, the rooms are small compared to what we're used to today, but each one is different. No, didn't see any ghosts, but it certainly seems like there might be one or two lurking just beyond the next corner of the long corridors.

No wonder I like to write about ghosts and haunted houses--and I've written quite a few.

My Deputy Tempe Crabtree series always has many ghosts and spirits. The only one about a haunted house is Spirit Shapes. 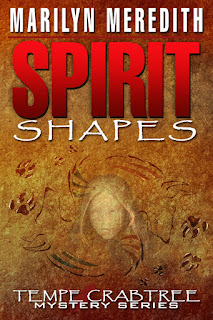 I even included a haunted house in my latest Rocky Bluff P.D. mystery, Violent Departures. 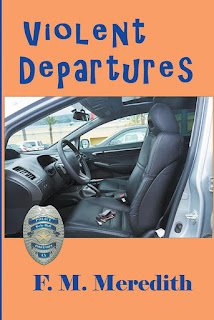 What about you? Have you ever visited a haunted place or encountered a ghost?