The lure of historic catastrophe hit when I was eight. On the movie screen a small American town celebrated the return of victorious soldiers from World War I. How exciting it must’ve been to live during real wartime, I thought.

Even at that tender age I knew America was engaged in a dangerous cold war with a vicious enemy, the Soviet Union. This massive Euro-Asian power—encompassing the former Russian empire plus pieces of the Hapsburg monarchy—threatened my freedom. If the US-USSR stalemate heated up, there would be drama and chances for glory ahead.

What did I know about war? (In my own way, I must have been as naïve as those deluded British soldiers in August 1914 who marched off to fight the Hun in what became World War I, feeling sure they’d be home by Christmas.)

Flash forward nine years. The Cuban missile crisis pushed the entire world to the brink of Armageddon. Only six hours before Khrushchev blinked—promising to withdraw his missiles from Cuba—I took my SAT exams. What the heck, I thought. If everyone faced nuclear annihilation, then I had little at stake and wouldn’t take my college entrance exams so seriously.

Now, decades later, those memories flicker in my head while I watch events in Ukraine on my television screen. As I write this, Russia has troops in the Crimean region of Ukraine and even more troops and a thousand tanks ready to cross the border. Pro-Western riots in Kiev have resulted in deaths and have been answered by pro-Russian protests, perhaps Kremlin-instigated. Centuries of ethnic bloodshed in this region lie behind these events.

Media pundits debate what the West can do. One points to a meaningful statement that presages these events, made by Putin a year ago. The Russian leader said the collapse of the Soviet Union was the worst geopolitical event of the entire twentieth century. Yes, really! The foreign affairs analyst confidently predicts a resurgent Russia under the crafty hands of Putin, whose first name is the same as Lenin’s, who built the communist menace in the first place. Oh, the portents are bad indeed.

This new threat to the world’s balance of power is a long way from playing out. Who knows where events will lead next? What will China do? North Korea? This may be high drama, but it is not entertainment. This is not fun. All these nations have nuclear weaponry. Are we in fact entering a new version of the old Cold War, or will things suddenly turn hot? Red hot?

Many people clamor for fiction that features massive annihilation as a backdrop. 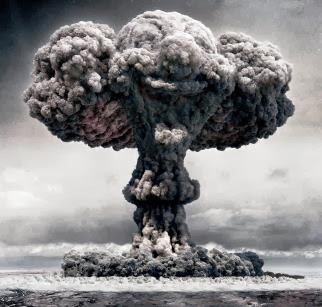 How do we explain being drawn to spy stories, horror movies, serial killers’ tales and the like? As a writer who kills fictive people for a living, I ponder this quite a lot.

I believe fiction like this works because it shows how people can act valiantly in ruinous times, overcome their fears, and emerge on top. When we read novels set during past wars, we can get scared but we'll know how things turn out. The Nazis always lose, even if a few survive to plot another day.

As indicated, I grew up when the Cold War was in fact pretty hot. An intercontinental ballistic missile was placed a few miles from my hometown in Kansas when I was in grade school. That excited me, rather than terrifying me. Serious tomes were written about “thinking the unthinkable.” Yet, to me, the unthinkable was preposterous. I assumed that mutually assured nuclear destruction would work as a deterrent. Surely rationality would prevail. Anything else would be unreal. In a word, fiction.

I moved rapidly from a severe case of Nancy Drew-itis to being mesmerized by John le Carré’s twisted spy stories. Smiley, his British master spy, was always at pains not to let the ends justify any means. His adversary on the other side of the Iron Curtain, Soviet master spy Karla, seemed to lack all scruples and toyed with him, playing a vicious cat-and-mouse game. Smiley’s bed-hopping wife Anne even got ensnared.

When I finally felt compelled to devise my own mysteries, it was natural to turn to my favorites as models. For two years I drowned myself in mysteries set during World Wars One and Two and the Cold War. There were so many excellent ones—too many, actually. Of all the major wars of last century, only the wars in Korea and Vietnam weren’t “taken,” weren’t overrun with thrillers. Vietnam offered a dangerous yet fairly empty gap that needed filling…and I concluded I’d do the filling.

What I studied in college and graduate school was Russian history. Obviously the Cold War fascinated me. These days, in our a-historic times, it’s important to recall why the United States got mired down in fighting a land war in Asia in the first place. The domino theory supplied the reason. If South Vietnam fell to the communists pushing down from North Vietnam, then that domino would fall and knock down another Asian country and another until they all fell into communist hands.

My penchant for historical wars helps explain why my debut mystery is set among the draft resister community in Toronto, Canada, ca. 1968. I enjoy writing about historical turmoil that lends itself to personal drama, intrigue, and murder; I can control the world that I build on the page. That is comforting.

But now I must return to my television screen, to wait for the newscasters to tell me that the crisis in Ukraine is escalating, waning, or mutating in some as yet unforeseen fashion. I watch, mesmerized, waiting for comfort to come, even if it is only temporary. Only until the next geopolitical horror fills my screen, or screeches from the headlines of the New York Times. Sadder and wiser than in my youth, I no longer trust the nuclear deterrent to work.