What Are the Odds? 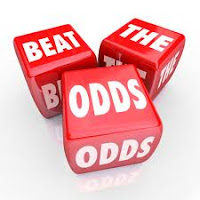 As a 47-year-old woman who's five months pregnant (and who did it the old-fashioned way), I'm glad I didn't read the statistics before Ed and I tried to have a baby.  I saw an article today where fertility experts basically said the possibility of someone my age getting knocked up without medical intervention was "slim to none."  I'm thinking part of the reason behind these so-called experts coming up with that hardly encouraging response was that they're all in the fertility game.  They want older women to think they need help (aka, they need to spend loads of moola) to conceive. I'm glad I listened to my ob/gyn instead of those geniuses.  Basically she told me, "If you're still having your period regularly, you've got a shot."  My internist threw in this tidbit, "If you still get cramp-like pains in the area of your ovaries between periods"--something called, and I'm not kidding, the schmertz--"you're still ovulating."

I had both, and my ob/gyn did a blood test called FSH, which some doctors use to gauge fertility levels, and mine was nice and low (the lower, the better in this case).  All systems seemed to be go, which gave Ed and I hope that it could happen.

Let me backtrack a minute by saying I'd been through some rough stuff in my early forties, as some of you already know, namely dealing with a breast cancer diagnosis at 42 and all the scariness that entails.  I had fallen in love and married a younger man, and I really hoped at some point I could make him a daddy.  I didn't have chemo so I didn't go into early menopause with my treatment.  But it also meant I couldn't possibly do hormone therapy to get preggers without a lot of risks.  So we opted not to do that, figuring we'd leave things up to nature.

At 46, I found out I was pregnant after I missed a period (or two) while working on a deadline, planning a fundraiser, and dealing with my mom's breast cancer diagnosis. Unfortunately, things didn't look very good from the start.  We didn't see a heartbeat on the sonograms when we should have. I miscarried at about eight weeks, on New Year's weekend of 2011.  Not the best start to a new year I've ever had, that's for sure.

"You'll be more fertile for the next two years," my doctor promised, urging us to keep trying despite how devastated we felt. Ed and I still had the attitude that if it's meant to be, it'll happen.  So we didn't give up.  Honestly, we just tried not to think about it, moving forward in our lives, keeping busy.  Until the day after my birthday in mid-October of 2011 when I found out I was pregnant again.  This time, I waited to go see my ob/gyn until I was pretty sure I was around eight weeks.  We saw a heartbeat on the ultrasound immediately, and Ed and I cried and laughed like a couple of fools. On the 20-week anatomy scan early in February, we learned that we're having a girl. So nice to be able to talk to my belly and call her "Emily" now--although I'm still fond of "Peapod," too.

I'm not sure what those fertility experts would think. They'd probably dub me an anomaly or something.  Although when I Google "pregnant at 47" and check out messages in over-40 chat rooms, it looks like I'm not alone.  Seems like plenty of women are getting pregnant naturally beyond our supposed expiration dates. I wonder if they get questions, too, like "weren't you menopausal already?" or "you must've had donated eggs, yes?"  Um, no and no.

I remember when some researcher came out with the odds of a woman over 40 getting married. I believe the statistic said we had a better chance of being killed by a terrorist than finding a mate. Yet another area where I don't fit the mold since I met Ed a few weeks after I'd turned 41.

Which is why I'm not a fan of all these goofy studies telling us the averages for all kinds of things from dating to diseases to babies.  I figure we'd all be better off if we'd just ignore them and live our lives the way we want.  Who the heck wants to be average anyway???
Posted by The Stiletto Gang at 3:30 AM

Email ThisBlogThis!Share to TwitterShare to FacebookShare to Pinterest
Labels: getting pregnant over 40, odds, statistics, Susan McBride