Life has dealt part-time mystery novelist Darcy MacDonald a lousy hand. The men she knows are either missing, dead, drunk or demented.
Lying next to the corpse of her boyfriend, the head of Bloodhound Investigations, definitely qualifies as lousy since he’s the man who also issues her paychecks.
The doctor says her boss had a massive heart attack during an orgasm, and it wasn’t Darcy’s fault. But she can’t help feeling guilty, since his orgasms were her responsibility. Or so she believed, until his grieving widow shows up, along with a mysterious, punk rocker chick who weeps inconsolably at the funeral and claims he was murdered.
Nancy Lauzon's Blog Tour Stop #8: Character Interview - Giovanna Pescateli
My latest mystery novel, A Few Dead Men, was inspired by my youngest daughter's disastrous dating history. The 'dead men' in the novel are composites of every boyfriend and/or bad date my daughter ever had. Believe me, I had lots of material to choose from. In fact, I didn't have room for all the 'dead men', since I didn't want to go over my word count.
This book raises several questions: Who exactly are dead men, metaphorically speaking? How did they become dead? Are there more dead men than live men? If not, where do you find live men?
But the book is also about a young woman compelled to solve the mysteries around her, like her favourite amateur sleuth, Nancy Drew. She doesn't go about it in exactly the same way.
Previous stops on the Blog Tour: Character Interview: Darcy MacDonald at
http://theunpredictablemuse.blogspot.com and Nancy Drew with a Twist of Lemon at http://www.nancydrewsleuth.com
N: Last week we met the heroine of A Few Dead Men, Darcy MacDonald. So today I'd like to welcome the heroine's best friend, Giovanna Pescateli, to the guest blog. Thanks for being here, Gio.
G: My pleasure, thanks for having me.
N: I think Darcy is mad at me. She got kind of snippy during our Character Interview.
G: Go easy on her, she's been through a lot. But I don't think she blames you. She knows her job as the heroine is to suffer.
N: She's not suffering anymore. The book had a satisfying ending.
G: Yes, and she was very happy about that.
N: Tell the readers about yourself.
G: I've known Darcy since college. We were roommates for a while until I moved in with my boyfriend Jack, who's a cop. I work as a paralegal at a local law firm, and I help Darcy out whenever she has questions about the cases she's working on.
N: What do you like about your character the most, and why?
G: I love that I confront and eventually overcome the problems in my personal life.
N: If you could change one thing about yourself, what would you change?
G: I wish I could eat as much as I wanted to without gaining weight. I'm Italian, and my family spends a lot of time cooking and eating fabulous dishes.
N: Describe your perfect day.
G: Spending the day with you-know-who, since I don't want to spoil the story for your readers. Then dinner and drinks with Darcy.
N: That's funny, she said the same thing about you. Plus a Colin Firth movie.
G: Darcy and I were separated at birth.
N: Last question, Gio. What was your favourite part in the book?
G: Getting stuck in that elevator. No contest.
N: Thanks, Giovanna!
Next stops on my Blog Tour:
Wednesday, March 21st - Whimsy and Writing

I'll be guest blogging on Angela Scott's site. Angela writes contemporary YA fiction. She has a brand new Zombie Western coming out this month called Wanted: Dead or Undead. (I'll be hosting her Book Shower next week.) I'll be conducting my 3rd Character Interview, featuring Eunice MacDonald, the heroine's mother.

I'll be visiting KB Owen, who loves mysteries and recently finished her first novel in a planned series, set at a 19th C. women's college in Hartford, Connecticut. I'll be blogging about what it takes to become an amateur sleuth.

A Few Dead Men - a Chick Dick Mystery is available at the following online retailers: 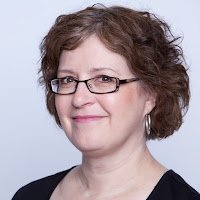 Nancy Lauzon worked nine years on a hospital ward as a cardiac nurse before the night shifts turned her into a zombie. She got a day job in health promotion and began to write health-related articles for magazines and newsletters.

Life threw out a few curve balls, and to relieve the stress, she began to write fiction part-time. Five years later she sold two different manuscripts to two separate small-press publishers, using a pseudonym. She left nursing in 2003 and began to write full-time.

Friend her on Goodreads
Posted by The Stiletto Gang at 5:00 AM