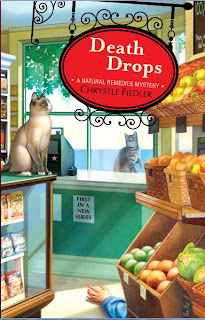 First of all I’d like to thank the Stiletto Gang for having me as a guest on their blog! I’m here to talk about my new book DEATH DROPS: A NATURAL REMEDIES MYSTERY that features Willow McQuade, ND, a naturopathic doctor who specializes in natural cures. When her aunt Claire is murdered, Willow takes over her health food store Nature’s Way Market & Cafe and sets out to solve the crime with a hunky ex-cop. Not only is Death Drops a fun cozy mystery it also has over 2 dozen natural remedies you can try at home. You’ll find everything from yoga to meditation, from vitamins to herbs and homeopathic medicines.

You may be wondering why write about natural remedies? Well, when I was growing up my mother practiced natural cures such as tea bag baths for sunburn, homeopathic remedies for colds and allergies (she even had her own homeopathic kit), arnica oil for sprains and bruises and, of course, chicken soup with garlic was always a staple. I knew that natural remedies worked and became a believer. This interest became the thread that would run through my entire career as a writer.

So, after I graduated from Boston University with a degree in communications, I dabbled in various vocations including advertising and television production (Designing Women, Evening Shade, Early Edition) in Hollywood, I became a journalist specializing natural health. I’ve written about natural cures for Natural Health, Better Homes & Gardens, Prevention, Vegetarian Times, The Health Monitor Network and was the Good Nature columnist for Remedy magazine.

So it was only “natural” that when it came to fiction, I’d focus on natural remedies too. In 2011, my life-long dream came true when Gallery Books/Simon & Schuster bought my natural remedies series.

Now, I’m looking forward to sharing Willow’s (and my) passion for natural remedies with readers. Since it’s cold and flu season I thought these cures would be most helpful:

1. Vitamin C and zinc. Vitamin C stimulates your immune system to fight that cold. Take 1000 mg. (to bowel tolerance) up to three times daily to shorten the duration of a cold. This is confirmed by over 30 studies that were analyzed by the Cochrane Database Systematic Review in 2004. Zinc, especially in the form of lozenges helps prevent viral replication of the cold virus in the throat by stimulating T-cell response. Stay under 50 mg. daily.

2. Elderberry can minimize the duration of flu symptoms including chills, headache and respiratory infection. According to a 2004 study published in The Journal of International Medical Research, when people were given elderberry syrup, (the brand name is Sambucol), 90% felt better after just three days! Elderberry syrup is also delicious! Take a dose every couple of hours you are awake when fighting something off. Decrease as you improve.

3. Drink two teaspoons each of apple cider vinegar and honey in a cup of hot water three times daily to break up mucus congestion. Diluted lemon in hot water or berry juices can help relieve fever.

4. Soothe a sore throat with a nice cup of licorice root tea. It eases irritated mucus membranes and stimulates the immune system.

5. Soaking in a hot bath is good for colds and flu. Draw a bath and add a cup of Epsom salts and 7 drops of essential oil of eucalyptus or ginger to promote sweating release of toxins. You can also sip some diaphoretic herbs in the tub such as elder flower and ginger. Afterwards dress warm and rest. Feel better!

If you have a medical condition check with your doctor before using these natural remedies.

Dr. Willow McQuade, N.D., a twenty-eight-year-old naturopathic doctor specializing in natural remedies, has decided to take sabbatical and visit her Aunt Claire, the owner of Nature’s Way Market and Cafe in idyllic Greenport, Long Island. But the idea of rest and relaxation is quickly forgotten when Willow arrives from a morning meditative walk to discover her Aunt Claire dead in the store, a strange almond-like smell emanating from her mouth and a bottle of flower essences by her side.

Despite her Zen nature and penchant for yoga, Aunt Claire had a knack for getting into confrontations with folks. An activist, she held weekly meetings for different causes every week in the store. The police want to believe the death is accidental—but Willow thinks she may have been poisoned.

Things get worse when Aunt Claire’s valuable recipe for a new natural age-defying formula, Fresh Face, is stolen during a store break-in, and an attempt is made on Willow’s life. Desperate for a way out of the mess, she turns to a handsome young cop Jackson Spade. Together the two set about solving the case the natural way—through a combination of hard work, common sense, and a dose of luck.

Death Drops is a gem! Entertaining, informative, and with a mystery that had me completely baffled! – Gayle Trent, author of Killer Sweet Tooth

"Fiedler's absorbing mystery is an entertaining debut, featuring a likeable menagerie of characters, filled with natural remedies, with all of it unfolding on Long Island's idyllic East End." Linda Bloodworth-Thomason, author of the national bestseller Liberating Paris.

For a chance to win a free copy of DEATH DROPS: A NATURAL REMEDIES MYSTERY, post a comment with your answer to this question: What is your favorite natural remedy?
Posted by The Stiletto Gang at 5:00 AM