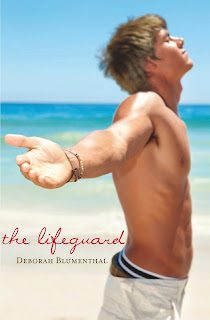 We are so excited to have author Deborah Blumenthal stop by The Stiletto Gang! Her new YA novel, THE LIFEGUARD, was just released and we are thrilled she's here to share some thoughts about writing and her new book! Here's a blurb about this inspired story that author Melissa Senate calls, "Gorgeously written..."
It's an unsettled summer for Sirena. Back in Texas, her family's splitting apart, but here in Rhode Island, at the cottage of her free-spirited aunt, it's a different world. There are long days at the beach and intriguing encounters with him. Pilot. He's the lifeguard with shamanic skills. He both saves her and makes her feel lost at sea. Sirena explores her obsession with Pilot and discovers his mysterious--almost magical--gifts.
Q: You have a hand in many facets of writing, everything from the New York Times Sunday magazine to children’s books, to your new YA novel, not to forget four books for adults. Why so many genres? Is there a common thread between them?
A: Ha, maybe I’m unfocused? No seriously, it’s just fun to write for different markets. The only two books with similar themes are FAT CHANCE, my romantic adult novel that deals with weight issues and self acceptance, and FAT CAMP, my YA novel, about a teenage girl coming to terms with the genetic hand she was dealt. But while the subjects of all the other books are different, what they have in common is my writing style which is spare and immediate.
Q: THE LIFEGUARD, just released, is your new YA novel. (Love the cover, BTW) Did you set out to write a YA story, or did the premise lend itself to the idea?
A: I knew from the start that it would be a YA novel. THE LIFEGUARD is largely about infatuation and the blurred lines between fantasy and reality, themes that tie into experiencing first love.
Q: At a glance, readers will be very drawn to the idea of this sixteen year-old girl, Sirena, and this oh-so-yummy lifeguard. But even as you read the book blurb, it’s clear that there’s a whole lot more to the story. As an author, what’s the dividing line between YA and an adult novel?
A: I don’t think there are definitive lines between YA books and those for adults. What it has to do with is recognizing that when you’re writing YA, you’re writing about people who have less history to draw on, so they experience things differently from adults. In terms of subject matter though, almost anything goes.

Q: What surprised you most while writing THE LIFEGUARD?

A:  For the most part, Pilot, the lifeguard is very close mouthed. It was as if he wanted to remain something of an enigma and refused to speak to me as a writer, so I let him have his way and I’m hoping readers will use their imaginations to flesh out his character. I may be criticized for that, but if I were writing the book now I’d still draw him that way.

Q: Time for the chicken or the egg question! What comes first for you, plot or characters?

A: Definitively the characters.

Q: Your list of published work is not only long and impressive, but, interestingly, also trends with the growth of social media. How does marketing this book differ from your first books? How has social media changed your approach? 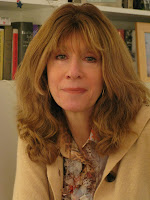 A:  Years back you hoped for good reviews from literary journals as well as newspapers and magazines. That was about it. Today we have blogs - like this one - which are wonderful venues for reaching readers, and then, of course, Facebook and Twitter, so we have a much wider field and far more potential.
Q: Because you are a trifecta author: Adult, Children’s and YA, do you find it difficult to switch writing hats, so to speak?
A: Actually it’s wonderful to hop around. If you’re stalled in one area, another type of book offers you a temporary escape hatch.
Q:  Aside from your computer, what’s on your writing desk, and which item is most important?
A:  A diary, bills, (boring!), DVDs, and my favorite thing, my little turquoise plastic good luck owl, who never takes his watchful eyes off me.
Thanks, Deborah! Visit Deborah's site or head straight to Amazon to get your copy of THE LIFEGUARD!
Posted by The Stiletto Gang at 7:25 AM

Email ThisBlogThis!Share to TwitterShare to FacebookShare to Pinterest
Labels: Deborah Blumenthal, The Lifeguard, YA