Life and Art and Maria and Arnold

Oscar Wilde once wrote that "Life imitates Art far more than Art imitates Life." I'm not sure which imitates which more, but I will say that life and art seem intrinsically bound together. Art springs from life and vice versa, and lately, it seems we've had plenty of examples of each.

As I watched the season finale of The Good Wife this past week, I had to chuckle sadly to myself. First off, if you're not a fan of The Good Wife, then you should be. It's one of the best shows on television. When I first heard of the show's premise, I have to admit to an eye roll. Attractive male politician cheats on his wife, gets caught, publicly apologizes to his constituents, all with the loyal wife standing by his side.


The only reason I watched the series premiere last year was because the show starred Julianna Marguiles and Josh Charles and I figured with that kind of cast, it couldn't be all bad. It has now become my favorite program on TV. In the wake of the whole Arnold/Maria split and the all the new revelations that have surfaced this week I can only say that the show becomes more relevant each day. 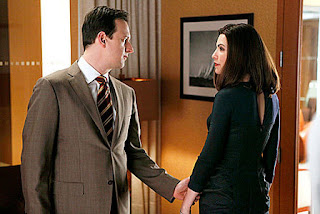 This week's season finale showed Alicia,  the "good wife" character played by Julianna, finally giving in to her attraction to her boss and long time crush from law school, Will (played by Josh Charles). I know I wasn't the only woman in America screaming "yes!" when they kissed in the elevator.
Was it wrong? Well, technically Alicia is still married to the cheating Peter (played by none other than Sex and the City's Mr. Big, Chris Noth) so I guess it is. However, it is finally time that the self-sacrificing wife, mom, and sole family supporter got a little lovin' herself. I kind of hope Maria is taking notes.
Posted by The Stiletto Gang at 5:00 AM