Is This Publish or Perish?

This isn't going to be the current dither about the minimal royalties traditional publishing houses are paying their authors for e-book rights. The bottom line is that authors are entitled to a bigger share of the e-book profits. There's nothing to debate. Publishers figure it out and shell out. You're going to eventually lose this argument, so do it now.

Nope, I'm going to rail about the idiotic publishing deals that have been in the news. I'm going to add that part of the reason why traditional publishing houses are in trouble financially is that they make ridiculous deals – and then are surprised when the advances aren't earned out.
Is there any Stiletto Faithful who intends to buy a book, any book, from Levi Johnston, Bristol Palin's baby daddy? Is there anyone who isn't appalled at the title of Levi's book, Deer in the Headlights: My Life in Sarah Palin’s Crosshairs? I realize that the publisher is playing off Sarah Palin's love of hunting, but I am also convinced that this is an allusion to the famous web site endorsed by the former Alaskan governor which had Democratic candidates in the crosshairs for defeat. Representative Gabrielle Giffords was one of those included. Levi Johnston should not have gotten a book contract because he has nothing to say. And Levi's editor should be ashamed for choosing that title.
Next: let's move on to the book contract that Bristol Palin, Levi's baby mama, received. Again, in a tight publishing market, when smart mid-list authors are being cut faster than a New York minute, why on earth would you give this 20-year old, with her new jaw, a publishing contract? Who is going to buy this book? And even if the publisher is sure there is a market, where is the good sense that these people were born with? 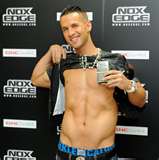 Last but certainly not least. What about the six-figure book deal that Mike "The Situation" Sorrentino of Jersey Shore fame managed to score? Now there's a philosophy that's worth mega-bucks, sarcasm intended.

These publishing deals are stupid. Besides the fact that these faux-celebrities have nothing to add to the general discussion, we all know that not one of them is actually doing the writing. And I would bet dollars to donuts that the ghostwriters hired for these gigs are getting minimal pay and maximum aggravation.

Now if any of these faux-authors get a six-figure deal for a sex tape, I say more power to them. At least in that case, they're actually doing the "work."

But otherwise, publishers smarten up.

Marian, the Northern Half of Evelyn David