Final Thoughts on the Royal Wedding 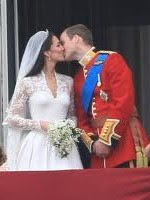 I got up at 4:30 in the morning, which isn't all that much earlier than I usually arise, went downstairs to avoid waking my husband who had made it very, very clear that he didn't care if it were his own daughter who was getting married, he wasn't watching it at "that" hour. I clicked on the TV, but after five minutes of watching people I didn't know have their invitations checked and double-checked (what do you mean you don't know who Elton John is), I hit the record button, snuggled down on the sofa, and was out like a light.

When I awoke, the ceremony had already begun, but thanks to the magic of the rewind button, I started at the beginning and watched for 20 minutes, ate breakfast, checked my email, and got back in time for the KISS.

So why did 3 billion people tune in for the nuptials of the century – at least the century so far? I can't speak for the other bleary-eyed folks, but I finally realized that I watched for the same reason that I write cozy mysteries – I like happy endings.

Like several billion others, I had watched another royal wedding almost 30 years ago, and it too seemed like it was destined for a fairy tale ending. But we all know that there was no Disney-esque finale to the Charles and Diana saga. And in retrospect, the reasons all seem so glaringly obvious, despite the fact that they were both royals, code for "she's not a commoner." Being from the same social mileu could do little to overcome a groom who clearly was settling not for the woman he loved, but for the woman who was socially acceptable; that there was a huge age gap that he was too stodgy and she was too naïve to breach; and that the bride had her own serious emotional issues that marriage in the spotlight only made worse.

But I looked at the bride and groom today and hold out more hope that this is the real thing – that they and I will get our happy ending. What I saw were two adults who met in college, started out as friends and then became romantically involved, and have waited to marry until they'd grown up, held jobs, and in her case, knew what she was getting into.

I'm happy to rave about Kate's dress (sophisticated and elegant) and moan about the dreadful hats that most of the female guests put on their heads. Seriously, it was like the Emperor's New Clothes, where apparently no one had the guts to tell most of these women (I’m looking at you Posh Beckham and Prince Andrew's daughters), that they looked ridiculous and would regret wearing those once the wedding photos were released.

But instead, I'm going to buy myself a scone, make myself a cup of tea, dream up some devilishly clever murder mystery…and make sure that there is a happy ending.