**This blog was suppose to post earlier, but the Friday the 13th Blogger gremlins decided to add to my debut blog fun!! Enjoy!! 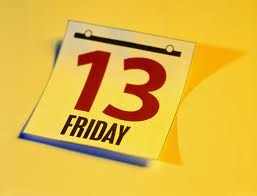 Today is my first day as a regular at The Stiletto Gang. I’ve known my post date for a while now; on my May calendar there’s a giant red circle around FRIDAY THE 13TH. Maybe the gang wanted me to have plenty of time to think about it. I’d like to tell you I’m not the superstitious type, but that would be a lie. And it’s probably best not to lie your first day on the blog. I’m sure the ominous date is a coincidence. In fact, I’m almost positive. But being more paranoid than superstitious, I can’t say I’m convinced. After all, stiletto wearing women convey a certain image, and it’s not like they try to hide their hooligan status. But since I’ve openly joined a gang, I shall take my solemn oath and any date-hazing in stride.

In an effort to counteract my inauspicious debut, and perhaps prove that I’m tougher than any calendar date, I did some checking into Friday the 13th. In numerology, 12 is considered the number of completeness. It defines the tribes of Israel, the apostles of Jesus and the gods of Olympus. It’s the hands on a clock completing a day. But number 13, a sad indivisible digit, is considered a sign of irregularity, violating the splendor of completeness. Hmm, maybe I do belong here… I digress. In any case, apparently all religions plus Greek mythology have a hang up with the number 13. Furthermore, the Stress Management Center and Phobia Institute (seriously, I’m not making this up) estimates that 21 million people are affected by Friday the 13th. That said, I suppose I’m in good company and my angst is not without merit.

My mother and husband celebrate their birthdays on the 13th. It doesn’t seem to bother them. On the other hand, they are also the only two people I know who could sleep in a cemetery with a Ouija board tucked under their head and get a good night’s rest. Neither one is susceptible to rabbit’s foot ideologies or theories about broken ladders, black cats, and voodoo dolls. Being a writer, however, I succumb easily to these phobias. Frankly, I think it’s a genetic predisposition: the creative are prone to irrational fears.

Perhaps it’s best demonstrated by the obsessive compulsive traits of a writer, which can almost always be linked to superstition. For example, I’d never start a day’s work without hot tea served in my black UGA

(University of Georgia, which you’ll hear me squawk about a lot) mug. We own a dozen UGA mugs, but it has to be the black one with the fat rim. Well, the black one with the fat rim until the day I dropped it in the sink and cracked the bottom. I swear, my writing hasn’t been the same since. After the mug come the ever inspirational Red Sox pajama pants. (I’m region flexible, team specific) They’re so worn Good Will would be insulted, but I’m convinced there’s a direct link between uninspired writing and pajama pants in the wash. I’m also computer specific and superstitious. My laptop is dedicated to book writing while the desktop is for freelance work and rewriting my children’s essays, book reports, etc. It’s an untidy place, littered with coffee stained papers and dust. Recently, we had a shift in activity at our house and I was banished to the desktop computer. Three quarters through my new manuscript, this was not the time to upset my rituals or test superstition. At first, I bitched and panicked. I was sure three quarters of this book was written to the best of my genius—which might not be saying much—and the rest was doomed. I’m pleased to report that I’ve rounded the corner to the finish, amazed that the bulky HP had little effect on my writing. Granted, I am wearing the pajama pants, so I’m not completely without a vice. But I believe it was a good lesson, proving that superstition is, perhaps, just that. So here I am, delivering my Friday the 13th blog to The Stiletto Gang. I look forward to being a part of this fine group of women writers and my June 10 blog. It happens to be the same date that the Salem witch trials began. By all means, ladies, bring it on. 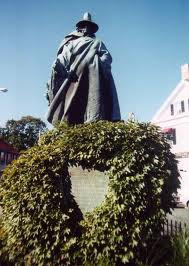 Posted by The Stiletto Gang at 1:17 PM