Dying for Justice: The Jackson Story That Almost Wasn’t 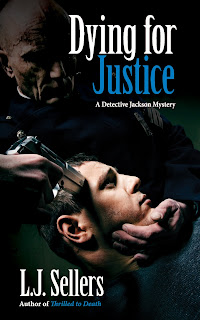 
When I started outlining this story, I felt like my novel-writing career had hit bottom. When I finished writing it eight months later, I was on a career high. So…Dying for Justice, the fifth Detective Jackson novel, which I’m giving away today, is a little different from the other four.

In February when I wrote the outline, I planned to give up the series because the second book had a failed launch and I worried that I would face more if I stayed with the same publisher. So I decided to launch a different series with a new character and hopefully a new publisher. I thought it was the only way I could save my career. I mapped out a plot in which Detective Evans, one of Jackson’s sidekicks, was the lead character with Jackson as a strong secondary character—hoping my old readers would come along and try the new series.

Then everything changed. My husband and I were laid off our jobs, e-books started to take off, and I re-envisioned my novelist career. I set the new Detective Evans manuscript aside to rewrite two standalone thrillers and put them up on Kindle. Next I regained the rights to my series and self-published the first four Jackson books. That took most of the year.

In late October, my series became a bestseller on Kindle and readers were asking for more Jackson novels. It was time to start writing again. After reading through my outline for the Evans-based story, I decided I really liked the plot and would go ahead and write it, giving the two detectives equal POV roles.

So my latest Jackson story also features Detective Evans as a major POV character. She and Jackson each work their own homicide cases and tell their own stories…which of course come to overlap in a stunning twist.

Every story I write is based, at least partially, on a social issue I feel strongly about at the time. When I conceptualized this plot, I couldn’t stop thinking about prisoners who had been released after their convictions were overturned. In several cases, the suspect had been coerced into a false confession. I felt compelled to highlight the issue.

In book four, Passions of the Dead, I’d mentioned that Jackson’s parents had been murdered and the killer had gone to jail. It was the perfect opening for a novel involving a false confession. I worried that having Jackson reopen and solve his parents’ case would seem cliché, but it’s only one element of the story. Detective Evans also works a case from the past and her main suspect is a police sergeant. The overlapping stories are powerful and readers have raved about the novel.

The other theme in Dying for Justice is the issue of family estrangement. I’m very close to my own siblings who all live here in Eugene. But my husband went for years without talking to his brothers, and I’ve discovered that the phenomenon is fairly common. I wrote about this issue to help me understand how it can happen to families.

Using two protagonists and cases made the story challenging at times, but I had a great time writing from Evans’ POV. She’s very different from Jackson—more physical, more impatient, more impulsive—and it was liberating to let her out in full action. In fact, once I developed Evans’ character more fully, I liked her enough to bring her forward into the futuristic thriller I’m writing now. My hope is that basing this new standalone book on a familiar character will bring my Jackson readers along for the ride.

To be entered to win a copy of Dying for Justice, simply post a comment. A winner will be chosen at random.

Buy Dying for Justice at Amazon

L.J. Sellers is an award-winning journalist and the author of the bestselling Detective Jackson mystery/suspense series: The Sex Club, Secrets to Die For, Thrilled to Death, Passions of the Dead, and Dying for Justice. Her novels have been highly praised by Mystery Scene, CrimeSpree, and Spinetingler magazines, and the series is on Amazon Kindle’s bestselling police procedural list. L.J. also has two standalone thrillers: The Baby Thief and The Suicide Effect. When not plotting murders, she enjoys performing standup comedy, cycling, social networking, and attending mystery conferences. She’s also been known to jump out of airplanes. http://ljsellers.com/