by Douglas Corleone
If you’ve seen the new Hawaii Five-0 on CBS, you know that Hawaii, for all its beauty, can still make an effective setting for a gritty crime series. In fact, the contrast of horrible happenings in paradise inevitably adds another dimension to the stories. Readers often experience an enhanced sense of dread as they wonder, What hope do we have if we’re not even safe in a veritable utopia?

I first moved to Honolulu from New York City in 2005. I had never even visited Hawaii before, so I was seeing the islands with completely fresh eyes. It was the perfect opportunity to begin writing about another criminal defense attorney who left the Big Apple for paradise. In those first days at my small work space overlooking Waikiki Beach, I created the character who would eventually become the protagonist of my mystery series – hotshot defense lawyer Kevin Corvelli.

To say that Hawaii was inspiring would be an understatement. The island of Oahu doesn’t only serve as the setting for my first two novels – ONE MAN’S PARADISE and NIGHT ON FIRE – it’s also my home and the only place in which I feel comfortable writing. I attribute that to the sense of calm I experience here, not only because of the perfect weather, but because of the laid-back atmosphere, the general serenity of the island’s population.

People don’t fight for parking spaces here (even though there is a terrible lack of parking in certain areas). I haven’t received the middle finger since I moved here; drivers allow you to merge and all they expect in return is a friendly shaka (the hand gesture for “hang loose”). Most islanders operate on aloha time, which is to say that clocks don’t matter much here in Hawaii. And best of all, I was able to leave my suits and ties back in the Big Apple. Here I wear T-shirts and shorts and sandals. Getting dressed up means slipping into a comfortable Tommy Bahama or Tori Richard aloha shirt.

Of course, island life isn’t for everybody. In the past two years I’ve lost four good friends who moved back to the mainland. But Hawaii works for me and my family. My wife Jill is happier here than she was when she lived in New York and Florida. My toddler son Jack doesn’t yet know anywhere else, but he certainly seems to enjoy being able to play outside and to splash in the ocean year round. And me, well, as I said earlier, I’ve found my home.

My point is, setting is as important for writers as it is for their stories. It’s difficult to imagine Raymond Chandler writing from anywhere but Los Angeles. Think of how John Grisham’s stories would differ if they weren’t set in his sometimes turbulent but beloved South. Even now emerging crime writers are marking new territory, whether it be present-day San Francisco or turn-of-the-century New York, or even a sleepy small town in rural Pennsylvania.

Some stories are remembered as much for their setting as for their characters. The same, I think, is true of authors. If my series character Kevin Corvelli and I are remembered at all, I hope we’ll be remembered for Honolulu. My advice to aspiring writers: whatever your setting, wherever you write from, make the area pop off the page, and above all, make it your own. 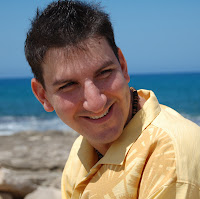 -------------
DOUGLAS CORLEONE is the author of the Kevin Corvelli crime series set in Hawaii. His debut novel ONE MAN'S PARADISE won the Minotaur Books/Mystery Writers of America First Crime Novel Award. A former New York City criminal defense attorney, Corleone now resides in the Hawaiian Islands, where he writes full-time. NIGHT ON FIRE is his second novel. You can visit him at http://www.douglascorleone.com/
Posted by The Stiletto Gang at 5:00 AM