Tales from the Crypt: I'm a Ghost Writer 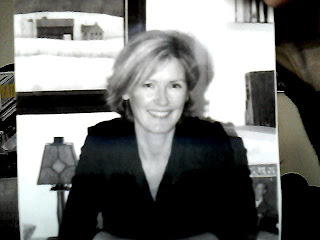 Alison Hendrie is co-author of the non-fiction book, LOOKING FOR A FEW GOOD MOMS (Rodale 2004), the story of the Million Mom March, and ghost writer most recently for the non-fiction lifestyle book, THE CR WAY (HarperCollins 2008), already in its fifth printing. As a freelance writer, her articles and essays have appeared in The New York Times and The New York Post as well as national magazines. She has also written several children’s books for the Trumpet Club imprint of Scholastic.
I’m used to being invisible. After all, I’m a mother of four active, social children who have somehow managed to reverse the old adage: it is now moms who should be seen and not heard. And preferably not seen, either, at least in front of their friends.

This may explain why I love ghost writing. One of the most valuable tools at a writer’s disposal is the power of observation. And what better way to soak in the color and language and vibe of your surroundings than from behind the cloak of invisibility? From this vantage point, the view is unobstructed and incredibly honest. Just as my ability to fade behind the steering wheel of the big, red mini-van allows me to catch up on all the middle-school gossip from my oblivious passengers, I find it easy, and even satisfying, to loosen my grip on my own, opinionated self in order to gain access to whatever project I ghost. Not quite as juicy as 7th Grade social Darwinism, but rewarding nonetheless.

It’s not that I don’t have an ego, don’t get me wrong. In fact, it takes a pretty strong, secure self-image to immerse oneself completely in someone else’s story, to literally get inside their heads and tease out just the right voice, exactly the correct phrasing. When Meryl Streep dons a wig and accent, she is no longer Meryl Streep but Julia Child or Anna Wintour (oh come on, we all know it was her). And so it is for the ghost, tapping into the author as character and writing from that perspective. See – told you I had an ego!

Like fiction, finding the right voice is perhaps the most important element in ghost writing. But unlike fiction, the voice already exists; instead of tinkering with a character’s motivation or background to uncover it, the ghost simply tunes her already sensitive ear to the author’s voice. This can be frustrating when you want to take the story in one direction and the author veers off in another. I mean, you are the writer, after all. You know how to string beautiful words together, to breathe life into a dull or arcane subject. Alas, it is not your story, no matter how closely attached you become.

What I find to be the most fun is the chance to explore and write about a topic I may never have imagined. It’s like getting paid to go to grad school. And by placing myself in the author’s shoes, the topic suddenly takes on new meaning, becoming interesting, important, urgent. For example, I would hardly call myself a health-nut and I certainly like my wine and pasta and dessert. But when I ghosted a book about calorie restriction, a controversial and still experimental method for extending life beyond the norm, I was suddenly fascinated with the way the body adapts to near-starvation. Images of cells and glucose and SIR2 genes danced in my head and if I had the will power to just say no to pizza, I might have jumped aboard. As it is, I think I gained weight while writing that book. But I never could have achieved this level of interest, never mind translate it into consumer-friendly copy, if I hadn’t adopted the persona of the authors.

A collaboration of this nature requires trust – both on the part of the author, and the ghost writer. Honesty, facts, and clarity are what I ask of an author. In return, I give insight, language and, I hope, a manuscript that connects a reader with an author in a personal and genuinely exciting way.

Ghost driver, aka mom, on the other hand, requires only my patience, silence and superb driving record. But then again, I get to be a part of my children’s lives. Even if they don’t know it.

Alison Hendrie
Posted by Dea, Kia, Jake at 5:00 AM

New comments are not allowed.