Back From New Orleans and Epicon 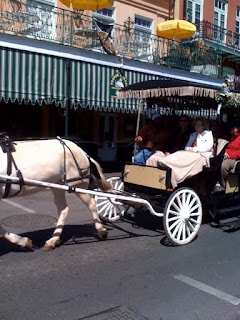 We left at 3:30 a.m. to go to the closest airport to us, a small regional airport in Bakersfield. At 6:15 a.m. we left and arrived in Phoenix where we not only had to change planes--but also airlines. Which meant leaving the terminal, catching an airport bus to go to a different terminal, and going through security again. None of this was easy. We'd chosen to take two personal items apiece rather than sending anything on through for fear of it not getting to our destination, so we had to haul these bags with us everywhere.

From there we flew to Houston, where we changed planes once again. We had very little time in-between any of these transfers. Finally we arrived in New Orleans and we took a taxi to the hotel. (Set fee of $33 one way for two people.)

The hotel was lovely and no sooner did we get out of the cab when we ran into a couple we knew. However, by this time, all we could think of was getting to our room, unpacking and finding someplace to have dinner and going to bed.

The next day we spent sightseeing (or eating our way through the French Quarter) until the first Epicon event began that evening. Of course we ran into many people we knew.

Though the con was well-planned with lots of good presentations, not many people took advantage of what was going on because the draw of the nearby French Quarter was too much.

I gave two presentations, "How to Write A Mystery" for the adults and more or less the same thing for the New Voices students the following day. That was truly a highlight of the trip. I had so much fun with the two kids who attended. Together we planned a mystery and what great ideas they had.

On Friday night, many of us went on a dinner cruise in a steam boat up and down the Mississippi River. After eating, hubby and I sat out on the deck and watched with amazement the many freighters and tug boats lined up one after another. We walked there and back--on the way back, hubby was afraid I wouldn't be able to find our way. No fear--it was easy.

Of course Saturday was the big banquet and awards ceremony--this was well-attended. We sat at the table with two of the other authors up for the same award as I was--best mystery-thriller e-book. I knew in my heart who was going to win and I was right, Michael Orenduff for his wonderful mystery, The Pot Thief. The first in his series.

The next a.m. we were up at 4 a.m. so we could catch our flight home at 6. We almost went through the wrong security line--realized it before we got too far. Finally got to the right spot for our plane in enough time to breathe--then the same wild trip back, only this time we flew to Georgia first then to Phoenix where again, we had to exit the terminal, catch a bus, got through security again and then we had a long, long walk to find the place leaving for Bakersfield and just go there in the nick of time. Phew!

Were we ever glad to get back into California and climb into our car and head for home.

We've made up our minds we'll never take such a complicated trip again. We're too old for all that running all through the airport loaded down with luggage to get from one airplane to another.

Despite all that, we did have a great time and the French Quarter looks just like it does in the movies.

Marilyn
http://fictionforyou.com
Posted by The Stiletto Gang at 4:55 AM