One Little Step or Maybe One Big Shove

Any task that seems impossibly big, incredibly complicated, or too much to accomplish can usually be done with some thought or research, careful planning, and pressing ahead slowly, one step at a time.

You think I'm talking about writing a book? Right?

Well, yeah, that advice applies to writing but it also applies to just about everything else in life that you're unfamiliar with doing: like putting together one of those "some assembly required" vacuum cleaners or bookshelves; hooking up a new DVR or sound system to your tv; installing new software; or adding additional memory to your computer. Often you can palm those tasks off on someone else. Usually a guy.

I'm just old enough to have been socialized to think that the males of our species are more competent at building things and putting mechanical or electronic things together than females. I'm just young enough to know it's not the "Y" chromosome, but experience that really counts. Guys had more chances to do those things; while girls from a very early age were subtly told that they were good at other things. No one told me I couldn't learn to use a table saw, but no one told me I could either. And of course there is a difference between not doing something because you can't and not doing it because it's difficult and you choose not to try.

When you have an older house and live alone, it's vital that you develop some courage and learn to do some things for yourself – that's if you don't want to be constantly at the mercy of other people's schedules. I've found that, outside of climbing on the roof (I have this fear of heights thing I can't shake) or crawling under the house (I have this fear of spiders thing that I won't shake), I can do most things if I take my time and do a little research. I've changed out the guts on my toilet several times. I've figured out how to seal a broken window in the middle of the night during a power outage in the middle of an ice storm. I've had to find the outside water cutoff when an old plumbing value in the kitchen gave way. And I can follow the vague and deliberately misleading instructions that come with anything requiring "some assembly."

Okay, I admit it takes me about four times as long to affect a repair or put something together as it would my father and the results aren't very neat, but I am getting faster and better the more I try. And I confess that I don't enjoy doing any of those repairs or furniture construction projects, but it's my suspicion that my father doesn't really like doing any of those things either.

My latest project was moving out my old non-working television so I could replace it with a new flat screen television. Besides having to make a major purchase at Christmas, the problem was that I had an older 46 inch Sony Wega with a picture tube – it weighed about 200 pounds and was as deep as it was wide. Think baby elephant with a glass screen. My father had promised me when he and a neighbor struggled to move it into my house in the late 1990s, that he would not be moving it again. I took him at his word. It was up to me to get it out.

I knew if I could get it off its stand – about two feet high – I could put it on a dolly and move it. The trick was getting it to the floor without breaking anything – my bones and/or the wooden floor. It took me about a week to figure out a way. I used large sofa cushions piled next to the tv stand. Then I tipped the front heavy (unplugged) tv onto the cushions. Having the tv on the stack of cushions, allowed me to tilt and move the tv anyway I wanted. 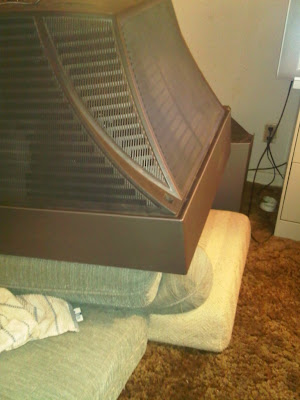 I know – I've heard all my life that tvs were dangerous and you could get an electrical shock from something inside them, even unplugged. I couldn't figure exactly what that "something" was, but I was properly fearful the entire time I was gutting it. (Note: Nothing happened but I should probably caution you not to repeat my actions, just in case.) As soon as I had removed enough to make the size more manageable I got "walked" it out the door, then wheeled it to the end of my carport. I'll figure out what to do with the carcass another day.

Meanwhile I'm watching my new 46" HD Samsung flat screen, wondering why I had to upgrade my cable in order to receive HD channels, and contemplating knocking out a wall between my kitchen and my dining room. I'm pretty sure I'll need a sledgehammer. Anyone know an easy way to pinpoint something called a "bearing" wall? Just kidding. Well, maybe not.

aka The Southern Half of Evelyn David
Posted by The Stiletto Gang at 5:00 AM