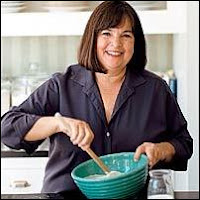 For a bunch of writers, I notice that we all watch a lot of television. So no surprise that this entry is not only about television programming, but a complaint about its delivery.

In my town, you have two choices for cable television. If I choose one, then I can’t get MSNBC. Not acceptable. If I choose the other, which I did, for the last three weeks I couldn’t watch The Barefoot Contessa or House Hunters. Cablevision and Scripps were engaged in mortal battle and in the meantime, both the Food Network and HGTV were not available. Heck I could give up Keith Olbermann, but Ina Garten? Grrrr

There was a third alternative, but I’m hoping that environmentalists and historians will applaud my decision not to subscribe to DirectTV. Here’s why. We actually did use their services, quite happily, until we made the fatal mistake of upgrading to one of those big TVs with High-Definition, which means I can see the pores and plastic surgery scars of actors on crime shows, and my husband and kids can watch sports ad nauseum, constanly murmuring that it was better than if they were in the stadium (for one reason, there's no cost for constant snack service). So once the new television was delivered, I called DirectTV and was even perfectly willing to pay the premium for the upgraded service. I was only mildly annoyed when it appeared that they had cancelled the appointment without telling me. But in fact, they hadn’t cancelled the appointment, they had, in effect, cancelled me. It appears that the 200+ year old tree in my front yard was blocking the necessary reception for the upgrade and I had only one choice. Cut down the tree (horrified gasp) or change providers. They were astonished I chose the latter and continue to inundate me with constant entreaties to come home again, albeit treeless.

Of course, like more than 50 percent of cable-TV watchers, I see no program during its original showing. I DVR anything of interest and watch it at my leisure. Or if I just want to watch the highlight that is being discussed around the (virtual) water cooler, I check out YouTube. First, I rarely stay up late enough to see any of the better dramas – and a device that lets me skip ads – worth its weight in gold.

A far cry from when I was growing up. Then you built your week around the television shows you wanted to watch. If you missed an episode, you were resigned to waiting months until it was shown in reruns during the summer. Then came VCRs, and while I never did master the art of scheduling a taping, I was still able to amass a small library of tapes of my favorite shows. Of course, then the guys in suits (almost all male) realized that folks were willing to actually pay to buy a tape(s) of entire seasons – and if they threw in a couple of commentaries by the director or stars (who often seemed surprised at the episodes in which they appeared) – there were big bucks to be had.

Which brings me back to my original whine. Until late Thursday night, it appeared that I was going to have to put Ina Garten on a milk carton in order to find her. Even if she adores fennel – which I loathe – and even if she has never met a stick of butter she didn’t use or a tablespoon of salt that she didn’t add – I adore her recipes (modified as necessary) and her style. I love that when asked by actress Jennifer Garner, another fervent fan, if she could appear on her show – Ina, size 24 and proud of it, politely declined and said “Only my real friends appear on the show.” And how about House Hunters? Despite the fact that the couples inevitably pick the ugliest house of the three they’ve been shown, I want the opportunity to yell at the television set in the vain hope that they’ll change their minds and buy themselves a house that doesn’t have an “open floor plan” where everyone in the living room can see their dirty dishes.

I was ready to rent a billboard with this warning: Scripps/Cablevision – get this settled or things are going to get ugly in the Evelyn David (Northern half) household. Don’t make me tell you again or it’s on your head that a perfectly healthy old tree will be kindling.

Another victory for tree-lovers everywhere.