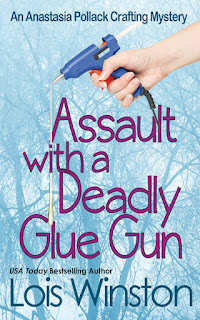 This is a conversation I’ve had many times since Assault with a Deadly Glue Gun, the first book in my Anastasia Pollack Crafting Mystery Series, debuted in 2011. Lucille Pollack is the character my readers love to hate. Is it because so many of my readers have mother-in-law issues? Perhaps.

Or maybe it’s because Lucille is such an over-the-top unbelievable character. I’m sure many readers think so, but here’s a little secret: Unlike all my other characters, Lucille didn’t spring from my imagination. The woman who makes the Wicked Witch of the West look like Rebecca of Sunnybrook Farm is based almost entirely on my own communist mother-in-law.

Yes, you read that correctly. My mother-in-law was a card-carrying commie. Beyond that, though, she was nasty, really nasty, especially if you dared to have an opinion that differed from hers. This was a woman who always knew everything, an expert on every subject. And she was always right—according to her. No one else’s opinions mattered because everyone else was always wrong. You didn’t have conversations with my mother-in-law; you were subjected to lectures—on every subject under the sun. She wasn’t perfect, though. She did fail at things, but when she did, it was always someone or something else’s fault. Never hers.

A couple I knew and whom my father-in-law had befriended, once called me the day after they had dinner with my in-laws. They wanted to know how I put up with “that woman.” This was a pattern throughout the years I knew my mother-in-law. Friends never lasted long because she was so insufferable.

Even my father-in-law, who had always seen his wife through rose-colored glasses, eventually woke up to her true nature. When he needed her most, she was too selfish and self-centered to be bothered.

The thing about antagonistic people, though, is that although they’re insufferable in real life, they make for great antagonists on the page. My mother-in-law grew increasingly nastier the older she got. However, instead of letting her get to me, I brought her doppelganger to life in the form of Anastasia’s mother-in-law Lucille Pollack. Whether it’s a matter of “don’t get mad, get even” or turning lemons into lemonade, all those years of putting up with my mother-in-law paid off in the end when I created the characters my readers love to hate. 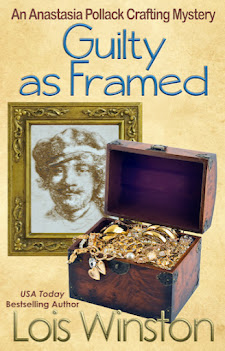 My one regret? My mother-in-law didn’t live to see my literary revenge, but it wouldn’t have mattered. She was too highbrow to waste her time reading fiction and certainly wouldn’t have read anything written by her stupid (her word) daughter-in-law. Twenty novels, five novellas, and a children's book later, revenge is sweet.

USA Today and Amazon bestselling and award-winning author Lois Winston writes mystery, romance, romantic suspense, chick lit, women’s fiction, children’s chapter books, and nonfiction under her own name and her Emma Carlyle pen name. Kirkus Reviews dubbed her critically acclaimed Anastasia Pollack Crafting Mystery series, “North Jersey’s more mature answer to Stephanie Plum.” In addition, Lois is a former literary agent and an award-winning craft and needlework designer who often draws much of her source material for both her characters and plots from her experiences in the crafts industry. Learn more about Lois and her books at her website where you can also sign up for her newsletter and follow her on various social media sites.
Posted by ANASTASIA POLLACK at 1:30 AM