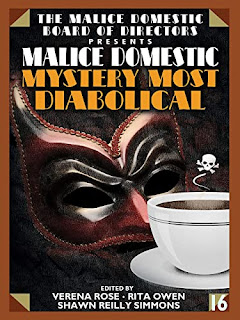 In World News ERA, Ashleigh Durden wrote an article “Why is May Short Story Month?” that delves into the history and practices to celebrate short fiction. She traces declaring May short story month to Dan Wickett, the founder and editor of the Emerging Writers Network (EWN), who on April 7, 2007, posted an article suggesting a short story month, just as April had been designated National Poetry Month. That following May, Wickett read and reviewed a short story a day. Due to reader enthusiasm, the next year it increased to two stories a day and in the third year to three stories a day.

Meanwhile, writers were urged to set a goal of the number of stories they would write during the month. StoryADay.org continues this tradition with suggestions for short stories to read and prompts and advice about writing short stories.

Earlier this month, on May 9, Malice Domestic released its latest anthology, Mystery Most Diabolical, published by Wildside Press and edited by Verna Rose, Rita Simmons and Shawn Reilly Simmons.

Art Taylor featured three of the stories in his The First Two Pages: “All in the Planning” by Marco Carocari, “There Comes a Time” by Cynthia Kuhn, and “Fly Me to the Moon” by Lisa Q. Mathews.

In addition, Barb Goffman, winner of the Agatha Award twice as well as the Macavity, Silver Falchion, and 2020 Readers Award given by Ellery Queen’s Mystery Magazine, described her story, “Go Big or Go Home,” in her Sleuthsayers post “Everything is Fodder”, where she explains how almost any irritation can lead to a mystery short story.

I’m proud and humbled to have my story included with those of many accomplished and distinguished writers. Here’s a complete list:

Leah Bailey · “A Killer in the Family”

Marco Carocari · “All in the Planning”

Maurissa Guibord · “Into the Devil’s Den”

Victoria Hamilton · “Reunion with the Devil”

Kerry Hammond · “Strangers at a Table”

Smita Harish Jain · “Keeping Up with the Jainses”

Cynthia Kuhn · “There Comes a Time”

Tim Maleeny · “A Cure For Madness”

Lisa Q. Mathews · “Fly Me to the Morgue”

Alan Orloff · “There Once Was a Man Named Larue”

Nancy Cole Silverman · “The Case of the Sourdough Starter”

Shawn Reilly Simmons · “The Devil’s in the Details”

Here’s a little about the background for my story, “Reputation or Soul.” When I saw the call for Mystery Most Diabolical, I looked up “diabolical” in the online Merriam-Webster Dictionary. It had a note about the origins of the term, from the Greek “diabolos” that means “slanderer.” Usually, “diabolical” is associated with the devil. I began thinking about a trade off: if given a choice, which might a person be willing to live with--losing a soul or having a maligned reputation?

I started with an image of a jilted bride, sitting in a turret room in the church, knowing with certainty that her groom had skipped the ceremony as well as stealing a substantial sum of money. I was certain the bride remained calm about this occurrence and equally certain that her younger brother, the narrator of the story, was completely puzzled about her response.

Together, they went to visit their abusive father, now confined in a nursing home. The father berated them, but the sister spoke kindly to him without telling him about the runaway groom. Then, the sister asked her brother to go with her on her honeymoon trip, to a location where she expected the groom might resurface.

Whose action will hurt most? In a scenario where almost everyone has a reason to seek revenge, will it occur and what will be the consequence?

There are still a few more days left in the short story month of May 2022. Why not check out the stories in Mystery Most Diabolical?