The Path to Sanity—T.K. Thorne 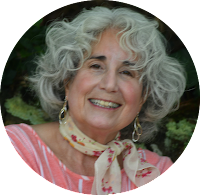 The world fell apart in March 2020. I was at a writers conference in California on the opposite side of the country from home (Alabama). One day after the start of the conference, I flew home. Two people in the airport wore masks. The rest of us tried to follow the advice “don’t touch your face.”  My nose has never itched so much.

Over the year, my grandson was born  . . . without me. Another daughter had to spend months in the hospital with her dying father . . . without me. Many people suffered much worse. So far, I have not lost any family. Actually, I’m am very close to the oldest in what’s left of my family. In the past year, I have been inside exactly one public place. How bizarre.

My mind has done some kind of trick where I can now see the death numbers posted on the side of the T.V. without feeling like I can’t breathe. That’s a good thing, right?  Maybe not. I try to not to watch the tributes to individuals because then I can’t breathe again.

Where lay the path of sanity?  It was a windy one. The muse deserted me.  I could not put pen to paper except to edit and to write this blog. Fortunately, I had a lot of material to edit, but the more days that have turned into weeks and month, the drier the well of creativity seemed. I had finished my police-witch trilogy (book two, House of Stone) and the eight-year nonfiction project (Behindthe Magic Curtain: Secrets, Spies, and Unsung White Allies of Birmingham’sCivil Rights Days. I finished a rewrite of an old manuscript and had no idea where to go next. I felt aimless, adrift.  Everything had a surreal quality.

The first thing I did that gave me a little peace was plucking debris and tiny plants from the green moss on the brick walk from the driveway to the front door.  It took hours; its only purpose was to create a little temporary beauty, but doing it calmed something inside me. 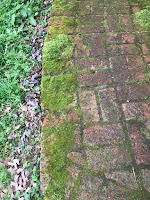 Then I took up the WW, the war on wisteria, a vine that had eaten half my back yard and uprooted several trees. This took months of back-breaking work.  Wisteria sends vines out underground that pop up yards away, making nodes along the way that each grow deep roots straight down. You can pull up one section, but any piece that survives can and will repopulate. I learned to know and love a tool called a mattock. Some days I could only do a tiny amount. But the harder I worked and the more exhausted I was, the better I slept and breathed. But I don’t recommend this as a therapy. Never plant wisteria, at least not the Chinese or Japanese variety.

The Wisteria War lasted through the summer and into fall. I decided to let the back yard become a wildflower garden (except for wisteria) and planted some old seeds that had been sitting out in my garage.  We’ll see if they germinate.

One thing I really missed was my twice-weekly martial arts class. Sometime in November, I decided to learn tai chi, which is practiced solo. You have probably seen old people doing it in a park. I learned it from Youtube videos, and whenever I felt trapped or anxious, I went through the movements. I did it three or four times a day, and it focused me on the present. 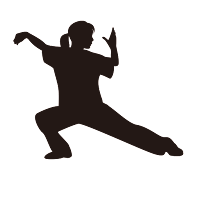 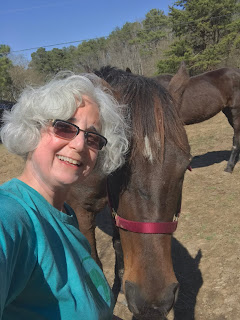 Over the winter, I lost my mind and adopted two rescue horses off the track, a Thoroughbred and a Standardbred—Foxy and Nickie Jones. I bought Foxy sight unseen from a Facebook picture at a “kill pen” in Louisiana. Her next step would have been dog food (in Mexico). She is a beautiful bay, although we’ve been working on a skin infection that even affected an eyelid. It’s all getting better. Nickie Jones was an older lady who traveled with her but when she arrived in Alabama, her purchaser backed off because she was injured and malnourished. So, we took her too. Preparation for their arrival took weeks of cleaning out the old barn and working on the overgrown arena and round pen.  Focusing on preparing for them and taking care of them has occupied me and my husband for several weeks now. But I am smitten!

Then a good friend introduced me to a form of art called Zentangle. It is done on little 3x3 inch pieces of stock paper—tiny art. I played with it and decided to add colors. Because it is so small, it is not intimidating like a big canvas would be. I’ve never done any "art thing" beyond doodling, but I’ve always wanted to.  They may not be great masterpieces, but the world fades away when I am working on one. 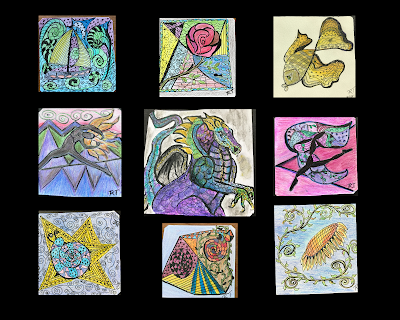 But still fresh words eluded me. No stories pushing to be born.

Then a friend I never met at that writer’s conference in California (we were supposed to be on a Law Enforcement panel together) emailed me and asked if I were interested in submitting a short story to an editor in Australia who is putting together a crime anthology featuring law enforcement authors and wanted some submissions from women. I am both of those things—an author and a cop, a retired one anyway, a short, gray-haired old lady. I agreed to submit a story. The catch is I had to write it. I had to create it. I told myself—this is like the tiny art. It's a short story, not a novel. Even so, I was totally blank. But I promised, so I had to do it. One word at a time.

I was delighted and surprised that the words came. It’s about a short, gray-haired old lady who is an ex-cop, a martial artist, and a horse woman who witnesses a murder. I've sent it off. Maybe I'll do another short story or maybe I have found a character who could support something longer?

I hope this helps you find your way through.