Lessons from a Year in Isolation

A year ago, so much of the life we were used to changed as we learned that Covid 19 not only was deadly, but spreading rapidly. I have a vivid memory of meeting with church council members and making the decision to “postpone” our bi-annual presentation of the Living Last Supper. At the time, we hoped this would be for a few weeks or months. We have not yet rescheduled.

During this past year, I found myself retreating into more solitary pursuits. I rediscovered the joys of reading books in series, which I had not had time for in the last few years. In addition, I learned about television programing and movies available on Apple and Prime.

Some of what I discovered took me to historical paths, I previously had not explored. I had seen several movies and series about Henry VIII and Elizabeth I, but I knew little about Henry VII and the War of the Roses. Watching The White Princess, about Elizabeth of York, and The Spanish Princess, about Catharine of Aragon, both based on books by Phillippa Gregory, gave me a different perspective about English history and the Tudors. In addition, going further back in time with the Brother Cadfael stories, based on books by Ellis Peters and played by Derek Jacobi, made me appreciate modern conveniences and customs in comparison with the medieval lifestyle. 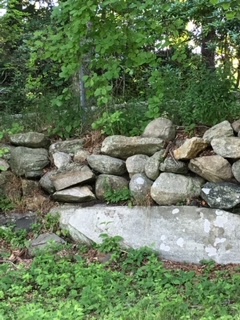 Recently, my viewing had shifted to American history. I discovered April Morning, based on a book by Howard Fast, that told the story of a young man’s experience when the British troops marched from Boston to Concord and exchanged fire with a group of colonists in Lexington, known as the “shot heard round the world.” I tried without luck to discover where the movie had been filmed.

A few years ago, I had the opportunity to go to Boston for a conference. I went early and stayed late to do some sightseeing in the area. The movie featured so many locations that were familiar to me from that trip. In particular, I had taken photos of the stone walls along the road from Lexington to Concord. After the colonists had so many casualties in Lexington, they stationed themselves behind the stone walls to fire on the British troops as they returned to Boston. Following the movie, I looked back at the photos I had taken of those walls, having a new regard for the history that had taken place around them.

Over the weekend, South Carolina held its statewide American Legion Oratorical competition. Unfortunately, due to Covid 19 continuing restrictions, the national one will not take place this year.

I was pleased to be asked to participate as a judge for South Carolina. My church hosted the competition and I found myself back in the room where so many decisions had been made to cancel activities a year ago. 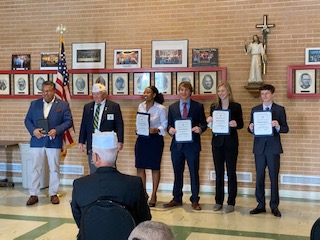 During the competition, in explaining how the Constitution is a living document, one of the students spoke about the events that took place around Lexington and Concord. It was wonderful to hear that a young person had spent a year in isolation as I had, learning from the past and appreciating its impact on the present and future. In spite of our year in isolation, we go on—still learning and applying the lessons of history to our current time. Hopefully, next year will bring the opportunity to return to travels and gatherings.
Posted by Paula Gail Benson at 12:00 AM