A few years ago, a friend in the leadership of a local American Legion Post asked if I would be a judge for its oratorical contest. I hadn’t previously heard about this competition. 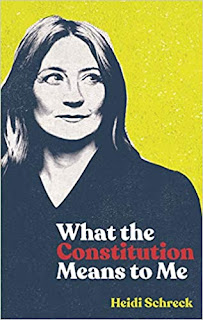 I knew about the Boys State and Girls State programs the American Legion operated each year, giving high school students a chance to learn about the branches of government by becoming part of the process. In the past, these summer events have taken place at our Statehouse where I work. I’ve found it inspiring to see the young participants walking through the halls, making plans about proposed legislation, and offering for mock elective positions. Hopefully, their experience will encourage them to consider future participation in federal or state government. Remember how President Clinton’s campaign proudly used his Boys State photo visiting the White House and shaking President Kennedy’s hand?

Similarly, since 1938, the American Legion’s oratorical contest has offered high school students the opportunity to learn about the United States Constitution by studying and preparing to speak about its provisions. Each year, the American Legion website lists the selected subject matters for the competition’s focus. Students must present one timed prepared speech without help aids. In the second round, they draw a topic from a container and make an extemporaneous talk.

By participating in the contest and placing in local, state, regional, and national levels, students win scholarships. The year I participated as a judge, we had only one student. We listened to her presentations so we could offer suggestions for improvements as she moved on to the next levels in the competition. She was phenomenal in the information she had compiled and her poise in delivery. I was delighted to get to know her.

Since I served as a judge, Heidi Schrek wrote and performed in a Broadway production called What the Constitution Means to Me. The show was based on Heidi’s own experiences going from one American Legion oratorical contest to another, winning sufficient scholarships to pay her way through college. It ran both off and on Broadway, winning the Obie award, being nominated for the Tony award, and being a finalist for the 2019 Pulitzer Prize for Drama.

In the show, Heidi channeled her teenaged-self participating in the oratorical contest. She dynamically expressed constitutional principles by making analogies to her own life. Midway through, she stepped away from the structure of the contest to provide more detail about her personal and family situation, giving additional insight into how the rights and privileges guaranteed by the Constitution influenced the quality of her life. The show’s final portion had Heidi debate a high school student on the question: "Should the Constitution be Abolished?" Each night, the debate was staged anew with the audience encouraged to express its opinion (cheers or boos) about what it heard and, in the end, vote which side won.

One of the Broadway performances was recorded for a wider audience viewing. In addition, the written play will be released on December 1, 2020. It’s particularly fitting for this time of year as we consider and are thankful for our history and all that has offers us. 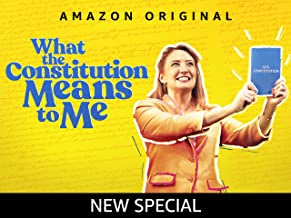 In the performance, Heidi mentions the book she used to prepare her oratorical presentations: Your Rugged Constitution by Bruce Allyn Findlay and Esther Blair Findlay (Stanford University Press, 1952). I found a used copy of the volume and ordered it. While it does not contain the most recent amendments, it remains a strong statement about the “living” document that is the basis for our laws. 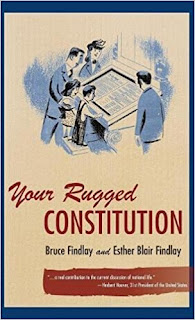